Meet Elizabeth Owusua who works as a lawyer by day, nurse by night 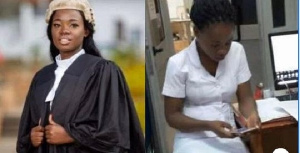 As a child, her dream was to be a nurse, lawyer, and a fashion designer with no idea about how it was going to happen.

Years on, this young lady, known as Elizabeth Owusua, has defied all odds to fulfil her dreams. Today, she works as a lawyer during the day and nurse at night.

The post by Elizabeth Owusua which has been making the rounds on social media since popular blogger, Abena Manokekame shared it on her page saw the former narrate her story which she attributes to God’s faithfulness.

“As a child, I always wanted to be a nurse, lawyer, and a fashion designer all at the same time with no idea how they were going to happen because of my background.

Well, I attended senior high school at Mfantsiman girls which helped shaped my entire being.

From there I went to the Nursing and Midwifery Training College at Korle Bu where I graduated with a Diploma in Nursing in 2008 and started working as a nurse in 2010 after national service.

I continued to Central University College where I did top up for a Bsc Degree in Nursing alongside work and graduated in 2013.

In 2014 I applied to GIMPA law faculty for an LLB and I got admitted which I did along with work mostly night shifts and gained admission to the Law school in 2017 after graduating from GIMPA and finally was called to the Ghana Bar in October 2019.” 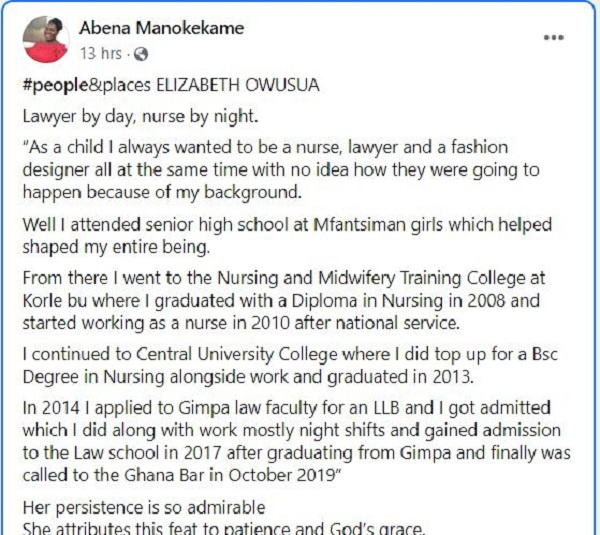