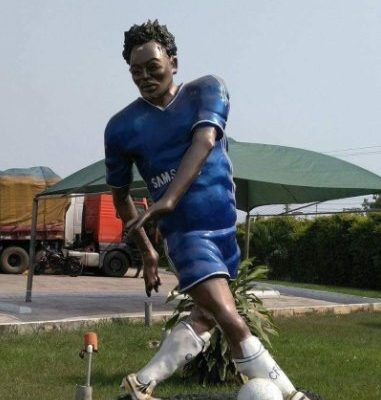 An image of Ghana midfielder Michael Essien’s statue has sent social media into overdrive as fans queue up to mock the football superstar.

Fans’ reaction to the odd-looking statue was a mixture of sarcasm, banter and comic relief.

The dodgy statue was erected in honor of the Persib Budong midfielder who has had an astonishing career so far winning, 58 caps for Ghana, 2 Ligue 1 titles, 2 Premier League titles, 4 FA Cups and 1 Champions League.

The sculpture has been in existence for some years now on the Boadi Road in Kumasi but the artisan is unknown.

Below are some tweets mocking the statue of the former Chelsea man:

This is a tough one but which is the worse statue?

OFFICIAL: Michael Essien becomes the next footballer to be immortalised into a dodgy statue. ?? pic.twitter.com/LHQLSOlIVd
— Football Tweets (@FutballTweets) January 3, 2018

The statue of Michael Essien in Ghana is the worst statue ever? pic.twitter.com/XHh5PltKv8
— ANTI - CELEB (@MBlegendary) January 3, 2018

Michael Essien's statue look horrendous. Ghanaians you have outdone yourself embarrassing a former @ChelseaFC player like that. Shame on ya'll.
— Evode (@Evode7) January 3, 2018

Someone tried telling me this picture of Michael Essien was photoshopped.

If Michael Essien's new statue is anything to go by, Pablo Picasso is alive and well! pic.twitter.com/WaDPruNdwJ
— Spencer FC (@SpencerOwen) January 3, 2018