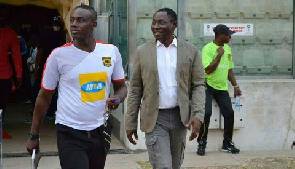 Interim Coach of Kumasi Asante Kotoko, Michael Osei has stressed that he holds no grudge against David Duncan.

David Duncan was sidelined as the head coach of the club after they lost some critical points in the early part of the first round in the league, and Michael Osei was given the nod to turn their fortunes around,and this prompted allegations that Michael Osei was the chief architect who ensured things didn’t workout for his head coach.

However, Michael Osei refuted the claims as he declared that there is no bad blood between him and his former boss.

“I never wished bad luck for David Duncan. I didn't like it when he was sacked, but I had no control over it,” Michael said on Boss FM.

“I’ve never had any problem with him.I still talk to him day in day out.” Asante Kotoko recovered from their early season relapse to finish in 5th position.