Microsoft bets on foldable, though not bendable, devices 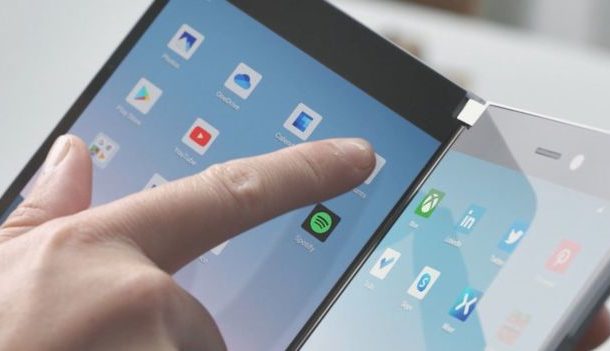 Microsoft has unveiled two folding devices, with dual touch screens, which it says will create a new category in mobile computing.
But, unlike attempts from its rivals, the firm has not adopted a bendable screen – nor has it decided to include a high-end camera system on the products.

Panos Panay, Microsoft’s chief product officer, gave a demonstration of the devices ahead of their public unveiling in New York on Wednesday.

“We want people to see the direction we’re taking with productivity,” he said, adding that the products will be released in a year’s time.

“This is the earliest we’ve ever shown [a prototype] Surface. We’re going to get developer units out pretty soon.”

One industry watcher said it was no surprise that Microsoft had shied away from trying to incorporate an all-in-one foldable screen, despite the fact that products using the technology had already gone on sale.

“Given the issues Samsung had with the initial version of the Galaxy Fold and the wider challenges around the fragility of flexible displays, it makes sense that device makers are experimenting with alternative designs,” commented Ben Wood from the consultancy CCS Insight.

As part of Wednesday’s launch, Microsoft also announced several updates to the Surface laptop range due to be released later this year, and open to pre-orders today.

The Surface Neo consists of two screens that open up to a 13in display with a split in the middle and runs Windows 10X, a variation of the operating system designed to run on dual-screen devices.

The Surface Duo – a smartphone – opens to 8.3in, also with a split, and runs Android, Google’s mobile operating system.

In testing the device, it experienced several glitches – including an unresponsive touchscreen, and sudden powering down.

Mr Panay stressed the devices were still in the early stages of development.

Mr Panay would not say how much the devices would cost, nor would he be drawn on whether his engineers had considered a flexible screen that would run across the split.

Instead, he said his preference was for the products to incorporate a hinge design that can bend both ways.

“It’s structured in a way that you’re actually optimizing and feeling good about being productive.”

Analyst Geoff Blaber said it would be some time until it became clear whether the devices would find favour with consumers.

“With Surface Neo and Duo, Microsoft is taking a brave step into a very new category,” he said.

“Duo is a bold new category of device and will take time to build developer and carrier support. This is the start of a journey for Microsoft and expectations should be set accordingly.”

Benedict Evans, from the venture capitalist firm Andreessen Horowitz, was even more skeptical.

“Every year someone makes a phone that’s ‘two phones with a hinge in the middle’,”

“The problem was always that firstly, the phone was twice the size and weight, and secondly, no developers would bother supporting it since it was a tiny percentage of the base.

“Now Microsoft has one…”

The Surface Neo can be positioned like a typical laptop, with an additional keyboard placed over the lower screen. In this configuration, the remainder of the screen acts as an extension to the keyboard, similar to – but larger than – Apple’s Touch Bar.

The smaller device, Surface Duo, will be seen as a competitor to Samsung’s Galaxy Fold. Unlike Microsoft’s effort, Samsung has managed to create a bendable screen made from plastic rather than glass. However, the product was delayed after reports of extreme unreliability. Despite adding reinforcements, the firm still recommends a “light touch” when using the $2,000 device.

Samsung’s device features six cameras, including a telephoto and wide-angle lens. Surface Neo and Duo, however, have just one front-facing camera, the specifications of which Microsoft was not yet willing to share. 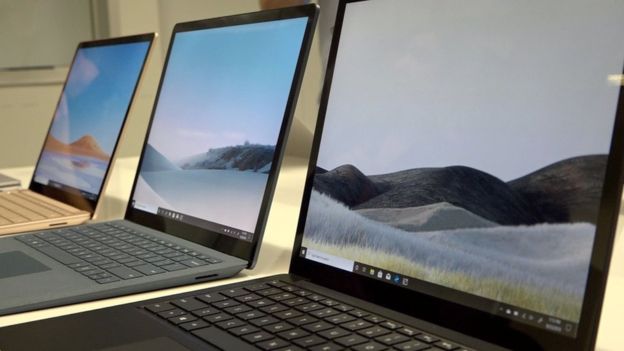 This isn’t Microsoft’s first attempt at a “booklet” computer.

In 2009, details leaked about a dual-screen product named Courier – but it was shelved less than a year later. Other projects, such as the Codex, never graduated beyond the research stage.

Since then, however, Microsoft has enjoyed considerable hardware success. Its Surface line first launched in 2012 to a mixed reaction, but has in time become a significant revenue stream for the firm. In the past fiscal year (ending in June 2019), the Surface range accounted for $5.7bn of Microsoft’s total revenues, up 40% on the previous year.

Kait Schoeck, senior industrial designer at Microsoft, said her team 3D-printed “more than a thousand” different shapes and sizes of the earbud in an attempt to prevent the device falling out – a common complaint with other brands of wireless headphones.

“But we also took the approach of just trying it on. It really comes down to making the prototype and putting it in people’s ears. So hundreds and hundreds of people would come through this lab, try it on, give us feedback, and then we go through another iteration.”

While being worn, Surface Earbuds can be used as a control device, such as tapping your ear to move on a Powerpoint slide, Microsoft said. 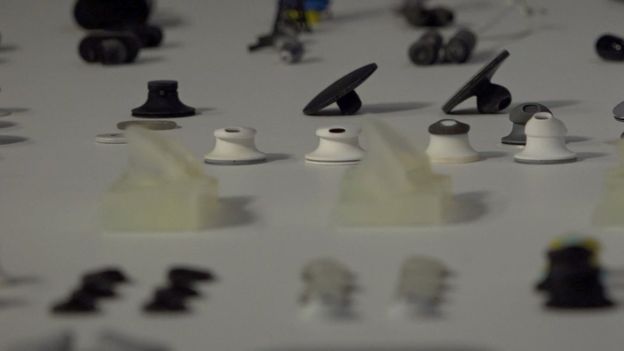