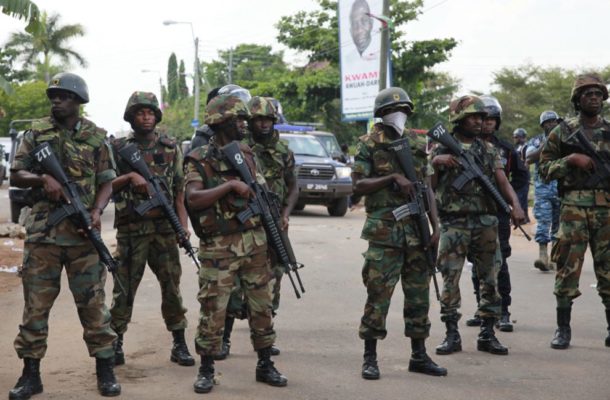 The opposition National Democratic Congress (NDC) has accused the ruling government of deploying the military to the Volta and Oti regions to intimidate residents and prevent them from taking part in the ongoing voters' registration exercise.

Member of Parliament for North Tongu Constituency in the Volta Region, Hon Samuel Okudzeto Ablakwa has described the military deployment as "deliberate profiling, discrimination and targeting of the Volta Region. It is not only Volta Region that is border region; we have other border regions like the Western border and Northern borders"

Former President John Dramani Mahama issued a statement in reaction to the military deployment saying: "I have sufficient reason to believe that there is merit in the concerns raised by the residents of these Regions. This represents another unprecedented low in the shameless abuse of state power to attack the very citizens whose safety and security the Akufo-Addo government should be protecting. It is becoming evident by the day, that the Akufo-Addo government perceives political power as an end in itself hence the resort to such crude and high-handed measures to usurp the mandate of the people.

"To send troops into regions in times of peace for the sole purpose of preventing them from registration amounts to declaring war on them. Any President sanctioning this sort of activity stands in breach of his oath to the people of Ghana. Any President doing this, commits a grave sin against the very people he swore to protect. No one would have imagined that a Ghanaian government would be so obsessed with hanging on to power as to subject its own citizens to such mistreatment and execute an ethno-tribal agenda of this magnitude against them," a statement released by his office added.

However, President Akufo-Addo says he has no intention of intimidating or disenfranchising anyone.

Opanyin Agyekum during Tuesday's edition of 'Kokrokoo' on Peace FM reacted to this controversy in a nice story.