We miss Afari-Gyan; He was far better – PNC 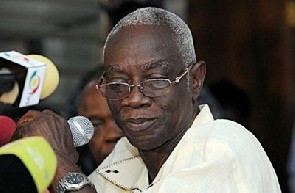 According to the party, Dr Afari-Gyan gave ample time to political parties to correct errors on their nomination forms before pronouncing candidates for the elections.

An act, the party says his successor, Mrs Charlotte Osei, failed to do.

The party in a statement signed by its National Treasurer, Akane Adams, therefore said, the actions of Mrs Osei may affect the reputation on the Commission.

The PNC’s reaction comes on the back of the EC’s disqualification of its presidential aspirant, Dr Edward Mahama from the December polls.

Dr Mahama’s candidature was dismissed on the grounds that many of the people who endorsed him failed to properly sign the forms.

Also, in places where there should have been thumbprints, they were largely omitted, with some only ticking the portions where they should have signed.

Also, it was found that two of the subscribers had also endorsed Ayariga’s candidature.

Below is the full statement

The conduct of the current EC boss can most likely destroy the good reputation of the commission following her recent conduct towards political parties. I must admit Commissioner Afari-Gyan was far better as we now have ‘hot heads’ mistaken for firmness.

The processes of filling nominations forms in 2016 are not different from the 2012 elections. However in 2012, all political parties were made to wait for at least 3 hours after submissions of their nominations forms after which came the electoral commissioner Afari-Gyan and his able team to point out the errors in the forms and the various parties asked to correct the errors for a final submission of their forms – All these took place at the electoral commission premises in the 2012 elections. The EC had 10 solid days to revert to political parties for possible remedy of errors whilst their case was pending at the high court but they failed to do so due to their self-intended motives.

Is the EC Boss in any competition to showcase her supposed firmness?

Does the EC Boss know the implications of her actions?

I hear by end by saying AFARI GYAN was far better, we all miss AFARI GYAN and we shall fight this inaction of the EC with the might available to us and we shall win the battle in the name of our high God and Allah.