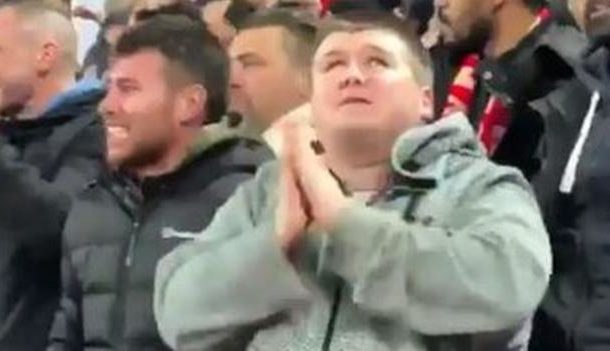 Last week, Mike Kearney was hugging his cousin in the stands at Anfield after Mohamed Salah fired Liverpool into the Champions League knockout stages.
Seven days later he was embracing the goalscorer himself.
Salah invited Kearney to Liverpool's Melwood training ground after a video of the lifelong Reds fans went viral.

It shows Kearney's cousin, Stephen Garcia, talking him through Salah's vital goal against Napoli.
Egypt forward Salah saw the footage of the 26-year-old, who was born with sight problems and has been registered blind since he was seven years old, and asked if it would be possible to meet him.
As well getting to explore the facilities and being handed a signed shirt by Salah, Kearney chatted to manager Jurgen Klopp, goalkeeper Alisson and striker Divock Origi.
"They were such a nice bunch of lads and everyone was really welcoming," Kearney told BBC Sport.
"I said to Alisson 'if it wasn't for your save, the video wouldn't have gone viral as we wouldn't have gone through!' and he was laughing."
Kearney is a regular at Anfield, but says it was a surreal experience to go behind the scenes and watch Liverpool's players in action at Melwood.
"At Anfield, it's part of the world you know well, but behind the curtain it is like 'wow'," he added.
"Imagine if we win the league this season and I've been in there with all those players!
"It's just how big the operation is, how big the pitches are and how much goes into it - I'll always be grateful to Mo and the club."Source: bbc.com