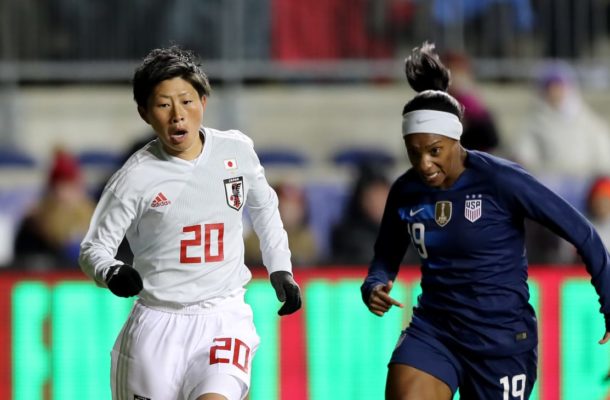 Philadelphia: Japan made it seven games without defeat, earning a share of the spoils in a dramatic 2-2 draw against the FIFA Women's World Cup holders the United States on the opening day of the She Believes Cup.


It took until the dying seconds for Asako Takakura's side to secure their point, with Yuka Momiki's stoppage time equaliser denying the Americans, who had appeared set for victory when Alex Morgan put them 2-1 up with less than 15 minutes remaining.

With Rikako Kobayashi and Arisa Matsubara both appearing for the first time on the senior international stage, Japan began the match on the back foot, but burst into life just after the 10-minute mark, when Kumi Yokoyama's effort hit the woodwork.

The Nadeshiko enjoyed a slightly brighter period in the minutes that followed, but their momentum was sharply interrupted when Megan Rapinoe benefitted from some pedestrian defending to convert Tobin Heath's delivery and put the hosts ahead in the 24th minute.

Two more Japanese players, Risako Oga and Mayu Ikejiri, made their debuts as substitutes shortly after half-time, and - somewhat against the run of play - the East Asians equalised in the 67th minute through Emi Nakajima, who calmly punished Tierna Davidson's failed clearance from 15 yards.

While Japan pressed on in search of a second goal, US coach Jill Ellis brought substitute Christen Press on, and she only took seconds to provide one; teeing up a simple header for Morgan in the 77th minute - the 99th goal of the forward's superb international career.

That goal looked, for the majority of the game's latter stages, like the winner, but sloppy passing in the American defensive half provided a final opportunity for Japan, who summoned a neat move which ended in Momiki forcing home the equaliser from close range after being supplied by Yui Hasegawa's telling final pass.

Japan - who became the first side since Australia, eight matches ago, to deny the US on home soil - will now face Brazil on Saturday, after the South Americans fell to a 2-1 defeat against England earlier on Matchday One.