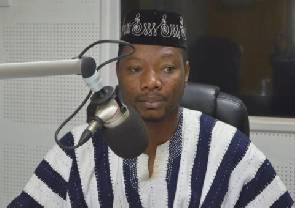 A former People’s National Convention (PNC) Member of Parliament for the Bolgatanga Constituency, David Apasara, has blamed the Chairman of the party, Bernard Mornah, for the disqualification of their Flagbearer, Edward Mahama, saying the latter was deeply asleep in his office, during the filling of the nomination forms.

Dr. Edward Mahama and 12 other presidential aspirants were disqualified on Monday by the Electoral Commission, for failing to meet the necessary requirements in filing their forms.

The Commission in a statement explained that, it disqualified the PNC because “many subscribers did not properly sign the forms. ”It further indicated that “thumbprints, signatures or marks were omitted all together.”

The EC further stated that, two subscribers to Dr. Mahama’s no
minations also subscribed for another presidential candidate, which is against the rules.

Speaking on the development, Mr. Apasara, who once failed in his attempt to lead the party, said Bernard Mornah should be held responsible since he failed to ensure that the party’s Flagbearer met the necessary requirements.

He is therefore demanding the immediate resignation of Bernard Mornah for being irresponsible.

“The leadership of the party is the cause. If you have a Flagbearer, it is the duty of the Chairman and the executives to work hard and make sure we complete the filing of forms in a very proper manner but not to sit down and you are embarrassed at the last minute.”

“Your party members are thrown off, without any head. They are all confused. I will blame Mr. Mornah because I was reliably informed that he was sleeping in his office when they were filling the presidential nomination forms.

He was sleeping. Why would you show that kind of lukewarmness. Who asked you to take over the leadership?,” he said.

His comments come a day after the Director of Communications for the PNC, Emmanuel Wilson, also blamed the party’s General Secretary, Atik Mohammed for the disqualification.

Emmanuel Wilson said the failure on the part of the General Secretary to pay attention to details resulted in the party’s disqualification.