Telecommunications giant, MTN Ghana has been exposed on the 'senseless data theft' meted out to its customers in Ghana.

Somewhere last week, subscribers in Ghana complained bitterly about their inability to undertake transactions due to fluctuations in data services and international outbound calls. Most of the subscribers who could not stand the poor delivery of the service, took to social media platforms to lambast the company.

MTN Ghana blamed the disruptions on “international undersea fiber cable cut”. The company regretted the inconvenience caused and subsequently promised to restore the lost internet bundles to the subscribers.

However, a highly disappointed subscriber has revealed that, the 2GB of data sent by MTN Ghana as compensation to customers for their lost bundles was just to make a fool out them.

The subscriber who mentioned his name only as Martin alleged that, the company, after sending the so-called 2GB data to his phone, intentionally reduced the speed to 25kbps, and he could virtually do nothing with it until he made a top-up.

"We all agree that the fiber cut was not a deliberate effort however I just realized you have capped the speed to 25kbps", portions of his letter written to MTN Ghana read.

In his letter, which was also copied to the National Communications Authority (NCA), Martin took a swipe at MTN Ghana, describing the company as a "disgrace and a cheat for stealing our bundle and refunding us 2GB with a capped speed of 25kbps".

Martin said Ghanaians are not ignorant about this theft strategy that the MTN Ghana uses on its customers, and is urging the NCA to put them 'to order on this senseless action'. 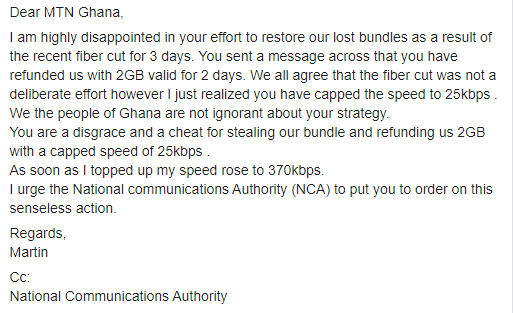