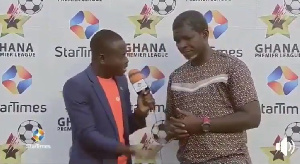 Head Coach of Kumasi Asante Kotoko Maxwell Konadu dodged his media duties after his team lost 2-1 against Division one side Asokwa Deportivo in the MTNFA Cup round of 64.

David Cudjoe's brace secured the three points for Deportivo after the Porcupines took the lead in the first half of the game through Richard Authur.

Maxwell Konadu then chose not to fulfill his post-match media duties as no member of Kotoko's staff spoke to the press.

Unverified reports suggested that Maxwell headed for the team bus immediately after full-time, with pressure beginning to mount over his team.

Kotoko lost their last game in Ghana Premier league against Aduana in the mysterious 10-men starting the game for both sides.