Mugabe must step down - Botswana president 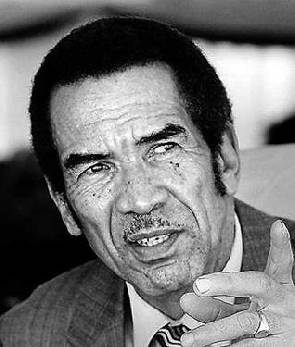 Zimbabwe's 92-year-old President Robert Mugabe should step aside without delay and allow new leadership of a country whose political and economic implosion since 2000 is dragging down the whole of southern Africa, Botswana President Ian Khama said.

Despite his reputation as one of Africa's most outspoken figures, Khama's remarks are certain to raise hackles in Harare, where factions of Mugabe's ruling ZANU-PF party are locked in a bitter struggle to succeed the only leader Zimbabwe has known.

Asked by Reuters if Mugabe, who came to power after independence from Britain in 1980, should accept the reality of his advancing years and retire, 63-year-old Khama responded: "Without doubt. He should have done it years ago."

"They have got plenty of people there who have got good leadership qualities who could take over," Khama, the UK-born son of Botswana's first president, Seretse Khama, and his British wife, Ruth, continued.

"It is obvious that at his age and the state Zimbabwe is in, he's not really able to provide the leadership that could get it out of its predicament," Mr Khama said, in comments that breach an African diplomatic taboo banning criticism of fellow leaders.

Botswana, the world's largest producer of diamonds, shares 800 km (500 miles) of border with Zimbabwe and has felt the full effects of its neighbour's economic collapse under the weight of political violence and hyperinflation since 2000.

Although the economy stabilised in 2009 with the scrapping of the worthless Zimbabwe dollar, a slump in commodity prices over the last two years has triggered a cash crunch that has fed through into unprecedented public anger at Mugabe.

No clear potential successor has emerged from the destabilising factional fight to take over after Mugabe.

Khama said the instability was damaging Botswana's efforts to wean itself off mining - which accounts for 20 per cent of GDP and nearly 60 per cent of exports - by promoting itself as a regional logistics and services hub.

The unrest was also forcing more and more Zimbabweans to leave the country, he added.

Botswana is home only to an estimated 100,000 Zimbabweans - a fraction of the 3 million believed to be in South Africa - although this is still enough to strain public services in a nation of 2.3 million people.