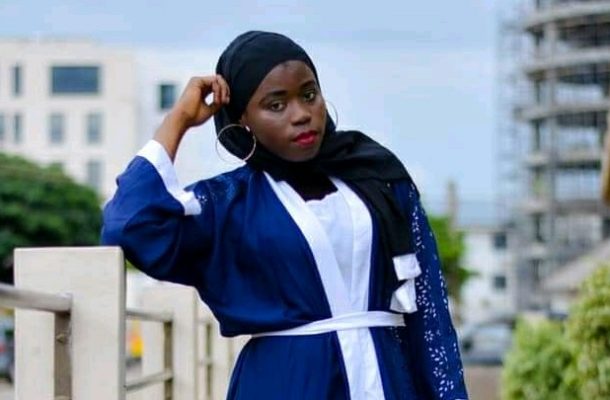 When you decide to go all out to achieve your goals only for something that seems to be part of you to be a hindrance, that obviously is going to be a hard blow to take.

Although the journey to success is full of rumps, religion must not be a hurdle.

Well, a Muslim lady by name Zainab Alhassan could not achieve her aim of becoming Ghana's most beautiful just because she refused to be on the beauty pageant without her hijab.

Zainab, who obviously was hurt, has shared her ordeal of what prevented her from possibly becoming the next winner for the much touted beauty pageant in Ghana; Ghana's Most Beautiful (GMB).

Read her full writeup below:

Most often at times when people talk about being discriminated against based on their skin color, religion, tribe or even sexual orientation, you may feel disconnected or assume they are exaggerating simply because it’s not happened to you before.

In Ghana the constitution prevents one from being discriminated against based on their religion, thus as a practicing Muslim who have chosen to wear the hijab, I should not lose out on any kind of opportunity or be seen as inferior simply because I have decided to put a piece of cloth on my head.

In high school, we were asked not to wear our hijab even if we leave the school compound, we agreed. We were then told that even when praying we should not wear the hijab but rather put our pillowcase on our head. Don’t tell me because it’s a missionary school for I know it’s a government school and it’s the government that pays all salaries.

After Senior high school, I decided to attend a radio school because of my passion for journalism, one of the instructors told me I was very good and will go far but he will give me a piece of advice, he told me that “Zainab if you want to go far in this profession (TV) you must remove your hijab” hurt as I was by that I thought it will not come to that for I believed I was so good that no employer will ignore me because of my hijab but it happened two times I was told the job is mine if and only if I took the hijab off, I didn’t so I lost that opportunity.

Just a few days ago I decided to try my luck on one of the most popular reality Tv shows in Ghana. Ghana’s Most beautiful. I know it’s a good opportunity for anyone who wanted to make an impact in their community to sell themselves and open great doors of sponsorship for them in their future activities. Of course I’m unemployed so it could be fetch me some money and help me land a job or two if I am lucky enough to go through.

During the auditions I did great, I didn’t flop for once, I didn’t shake or become super nervous in fact I was exuding confidence but it took a different turn when the issue of my hijab came up, I was asked why I wore it to the auditions, I explained, again I was asked if I will take it off in the course of the contest if I’m asked due to one activity or the other, I told them in this day and age, there’s really nothing that one cannot do in her hijab. Another question was asked that since I’m insisting I will not remove it “ do you bath in your hijab” as ridiculous as that question was I still answered, oh I was also asked how I make my hair, I told them I go to the salon obviously. In fact about 40% of the questions asked were based on my hijab.

The time of reckoning came when they were to pick those moving on to the next stage, they mention your name and tell you your fate. I was the fourth to be called and I stepped forward and he said “ Zainab you are very good but since You decided not to remove your hijab there is nothing we can do.” I was devastated but I kept it cool. I am sure the girls there selected to move to the next stage were very good no doubt, and I cannot tell if they did better than me which is very possible. What I did not understand why my hijab could be a hindering factor to my progress in the competition.

Will I keep losing opportunities because of my hijab? Most definitely but will I ever take it off to please someone, hell no. But we will fight, we will go all out for this struggle and we must win it. Our younger sisters and daughters must not and will not lose opportunities simply because they choose to wear the hijab, not as long as we leave in a secular and democratic society. #hijabIsanIdenty

KOFI KOFI 7 months ago
WHY DO YOU BRING ARABS INTO GHANA AT ALL?