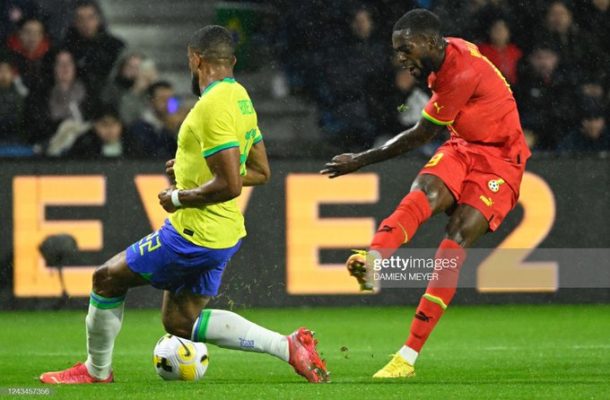 Black Stars new boy Inaki Williams made his debut for Ghana in the 3-0 defeat in an International friendly game played in Le Havre France last week.

He was then handed a start as Ghana faced 139th ranked Central American minnows Nicaragua.

After his Ghana debut, Inaki has been speaking to Spanish media house Larguero where he answers questions about playing for Ghana among others.

In the first place, the striker answered the question of who they would go to his house with in the event of a supposed match between Spain and Ghana.

"I could not tell you. They would be heartbroken. My mother, who is the one who feels soccer the most, and her children, I think she would have a very bad time,” he affirmed.

Iñaki also referred to the dance he had to perform in front of his teammates a few days before the debut: “I got the hazing of the new one. Not only me, but also some other colleagues. I gave it my all, I took forbidden steps and made them laugh. It was about that, having a good time."

“It had been a long time without going to a national team, without being called up, without spending days away with footballers who are not from Athletic, and the truth is that everything has been very different. I'm getting used to my new teammates, what it's like to play and live with them. They have made everything very easy for me since my arrival and the welcome has been incredible. I'm even doing a master's degree in English because it's the only way I have to understand each other and the truth is that I'm very comfortable and very happy to have made this decision” said the Atletico player.

Williams also referred to his brother Nico, a teammate at Athletic and selected by Luis Enrique: “Physically I'm a tad superior to my brother. As my little brother, he's always second-guessing me about who's faster, and he knows that even though I'm eight years older than him, I still give him cramp. Nico is better than me in one on one. There I think he is pretty much unstoppable.”