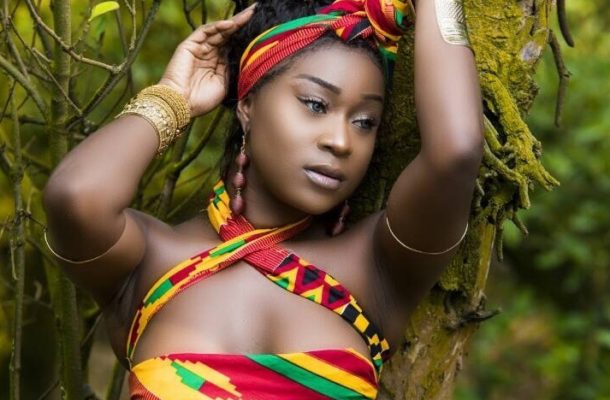 Some female Ghanaian celebrates  who command a lot of following on their social media platforms have mostly been tagged as ill-bred and unstable over the kind of unsavoury comments and photos they post.

This is not different with the 26 years old young actress based in the US, Andrea Owusu known in showbiz as Efia Odo as she still justifies her deliberate postings of her almost naked photos on her social media platforms.

As most of these actresses and musicians releasing their nude photos are labelled mentally unstable, the ‘Heels and Sneakers’ actress stated that for her, she is wholly sane.

Efia Odo said on Delay’s Show, she is not on any mental medication for her alleged bizarre behaviour.

“I’ve no mental problem… I’m very sane and not on medication but most of the time if I take bikini shots it’s usually an advertisement for a bikini given to me by someone. My recent photoshoot in Kente was given to me by a designer called Toshi De Label and I was paid for it.” The ‘Royal Diadem’ actress made a strange revelation about the number of men she has had sex with.

Efia Odo who was candid told the host she has slept with not more than fifteen men but more than twelve men.

According to her, she has sex with men she dates adding that there is no way she will engage in sexual intercourse for money like people think she does.

“As a woman, you may be thinking that in your head you are dating this man when in actual sense he is just sleeping with you. So he will be going around telling people he has slept with you”.