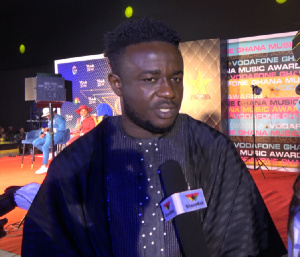 Gospel Worshipper, Perez Musik has considered himself blessed to have God deliver a song through him that has touched lives and performed several miracles in the country.

The 'Hewale Lala' singer in an exclusive interview with a GhanaWeb entertainment journalist, Paulina Dedaa Opoku, revealed that his hit single was an answer to a prayer request after 'wrestling' with God.

Perez who graced the stage at the 23rd edition of the Vodafone Ghana Music Awards on Friday, May 6, delivered a powerful performance at the Industry Night with his spirit-filled songs that got the audience charged.

Speaking on how the popular song was birthed, he said: "It is a song I believe God blessed me with. It was an answer to a prayer. At every stage in life, there are challenges. I was faced with a challenge so I prayed to God. I was actually saying that I was in a fight with God. He found a way to give me hope and it came through the song and I was okay, once he blessed me with it, let me bless it with others. People are being blessed and the song is serving its purpose.

"The song (Hewale Lala) is giving hope. I mean I have powerful testimonies. There was a pregnant woman who had an accident, she fell belly flat and at a point, the doctors thought the pregnancy was messed up. On their way to the hospital, they were praying to my song and singing."

Perez Musik added that the husband of the pregnant woman reached out to him to testify how his song saved the life of their newborn when doctors considered it all lost.

"They went for a second test and everything was okay so her husband called me. I didn't even know him. It was just about three days after releasing the song. He called and shared his testimony, I wept that God found some like me worthy to use," he told GhanaWeb.
Source: Ghanaweb