The Paradox of Ethnicity of Wealth in Ghana- an Akufo Addo Legacy? 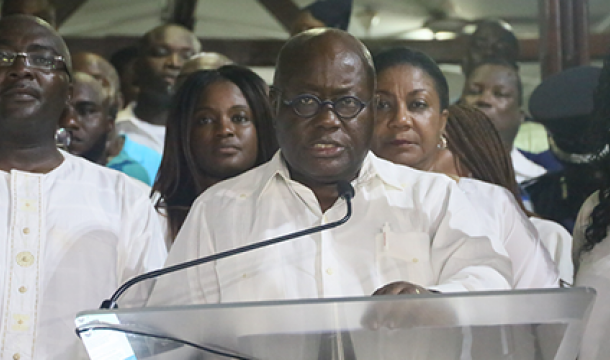 After the supposed banking sector clean up and its accompanying effects on some key businesses in Ghana, I have been doing a lot of thinking.
So many things have gone through my mind as the days go by as the effects and *"real intent"* behind this "clean up" becomes more and more obvious.

I have spoken to a lot of people, both from the banking sector and the business sector, I have also spoken to Politicians, historians and Journalists.
I have also read bit and pieces of various literature on ethnicity of capital and after several weeks, I have this short piece for your reading pleasure and I hope it is useful afterall.

Before I start let me acknowledge the relationship between the Politicians and the businessmen in Ghanaian Political dispensation.
Money plays an important role in Politics, infact money drives politics.
So the Politicians need money to run their general organisations and campaigns, money which the businessmen have in abundance.
The businessmen therefore finance the Politicians with the absolute hope that when they assume power, they are rewarded with juicy deals and contracts.

The businessmen then recoup their money with excesses and get more money to refinance the Politicians and the cycle goes on and on.
There are also some smart businessmen who strategically back the two main Political Parties so that whoever wins they know they are sorted.

During President Kuffuor's era, President Kuffuor empowered a lot of Ashanti businessmen(mainly NPP), gave them huge deals, raised them financially and made them powerful.
But he also smartly backed some Northen and Voltarian businessmen and empowered them to spread the wealth across their territories to attract more supporters for the NPP in those areas.

President Mills passed away and then President John Mahama took over.
There were some attempts to make some billionaires out of the Northen Region but it wasn't done to the disadvantage of anyone.
So there are people of Akan heritage(Akan businessmen) who also made millions under John Mahama.
Even though there were cries here and there that most contracts were going to his Northen brothers(which are yet to be substantiated), there were no signs of a deliberate attempts to destroy the wealth of opponents or Akan businessmen.

The point I want to make is that, apart from President Mills, under whose tenure we did not see any deliberate attempt to financially empower his tribesmen, almost all Presidents before President Akufo Addo had attempted to make billionaires out of the tribesmen(for obvious reasons).

Now fast forward to the era of President Akufo-Addo. Like any of his predecessors it was understandable when we started seeing similar signs of making billionaires out of his tribesmen(even though the signs manifested too early)

What has actually broken the camel's back under President Akufo Addo's tenure is not only the deliberate attempt to raise his tribesmen financially over everyone but also the attempt to crush the financial dynasties of everyone who is not part of his tribesmen or close circus to the ground.

This has been done not only through the so called banking sector clean up but also the deliberate cancellation of all government contracts signed by the previous government and re-awarding same.
By deliberately refusing to pay contractors, who had raised huge financing from banks for their projects (and their interests payments were soaring over the roof), they were able to drag a lot of these contractors into bankruptcy and the contractors took the banks who had given them the financing along with them.

Certain people were also deliberately targeted and their business dynasties destroyed, do I have to mention names?
*Heritage bank(even though very solvent) was practically crushed to the ground because under President Akufo Addo, a Northerner is not fit to own a bank!*

Never has the ethnicity of wealth become such a painful mystery under any government since the time of Dr.Kwame Nkrumah, the first President of Ghana who did not leave a single property for his children or his kinsmen.

I started this article by drawing the relationship between the businessmen and the Politicians, because like any Party in government, financiers would be given the opportunity to redeem their investment.
So definitely some businessmen will be more succesful than others under any government and that is a fact.

How many times have we not heard that under former President John Mahama, known NPP men were getting juicy contracts.
Like the current Minister of State in charge of National Security Bryan Acheampong getting a multimillion cedis payroll contract under John Mahama or Kennedy Agyapong(a known and vociferous NPP MP) getting a huge contract to supply prepaid meters?
And there are several of these examples which did not sit well with sympathisers of the NDC.

But former President Mahama understood very well the impact of ethnicity of Wealth and its effects on the larger economy and attempted to keep everyone satisfied.
But after what has transpired under this government; the treachery, the shear hatred, the insatiable greed and the crude economic scavengerism that has transpired under the leadership of President Akufo-Addo, I am afraid this Country may never be the same again.

The President and his cronies out of radical greed may have just set the tone for what may be a never ending tale of a paradox of Ethnicity of Wealth in Ghana.

A cycle that will take years of Political renewal to correct!