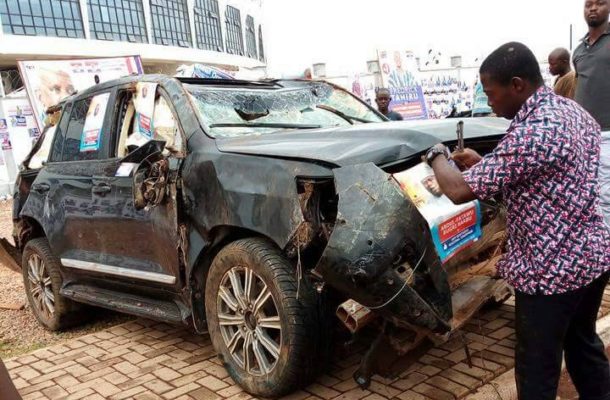 The mangled SUV belonging to the governing New Patriotic Party’s Northern Regional Chairman, Daniel Bugri Naabu, was put on display at the Tamale Sports Stadium where the party is holding its regional poll for that chapter on Saturday, 28 April.

It is not clear why the accident SUV was hauled to the venue of the polls but there are speculations that it is meant to diffuse claims that Mr Naabu staged his own accident to win sympathy votes in the polls.

Mr Naabu was injured in the car crash at Larbanga, Gonja West on Wednesday.

He was first treated at the Emergency Unit of the Tamale Teaching Hospital and later flown to Accra for further treatment.

The accident happened as Mr Naabu, his driver and a police officer, were returning from Bole where they had gone to campaign ahead of the polls.

Mr Naabu is seeking re-election as the Northern Regional Chairman of the NPP.