NAGRAT threatens to go on strike over salary arrears, other concerns 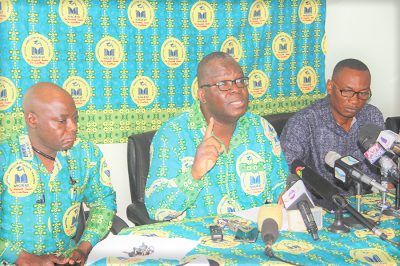 The National Association of Graduate Teachers (NAGRAT) says its members will withdraw their services from the start of the next academic year if a number of concerns bordering on the welfare of teachers are not resolved by August 31, 2019.

At a news conference in Accra yesterday, the association said the non-payment of salary arrears to teachers, delays in promotions, appointment of non-Ghana Education Service (GES) personnel to management positions at the GES, and "the imposition" of an insurance policy on teachers, among others, had left its members agitated.

The President of NAGRAT, Mr Eric Agbe-Carbonu, said many teachers were yet to receive payments for a backlog of arrears owed them contrary to government’s assurance that all arrears would be paid by the end of March 2019.

He said although some payments were made in April this year, most of the arrears remained unpaid, adding that "I cannot quote a figure regarding exactly how much is owed because even some teachers who were recently recruited also have arrears to be paid to them".

“We are anxious to know when we will receive our salaries.

We want the Ministry of Finance and the Ministry Labour and Employment Relations to come clear on the exact time such teachers will be paid their arrears," he said.

Mr Agbe-Carbonu said since 2015, most teachers who were successful at promotion interviews were yet to be issued with letters by the GES, stressing that those who had their letters did not have the effective date of promotion on their letters.

Describing the development as a grand scheme to delay the progression of the teachers to their next promotion, he said several reminders from the teacher unions to the GES over the matter had not yielded the desired result.

“This practice does not only cause anxiety among teachers who are scared of accumulating arrears that may not even be paid, but also discriminate against teaching as a profession,” he said.

Mr Agbe-Carbonu also expressed concern over what he referred to as an emerging trend regarding the appointment of non-service personnel to “top management positions” in the GES.

He argued that there were competent people within the GES who were capable of running the affairs of the service and, therefore, called on the Ministry of Education to consider the issue in order to sustain staff motivation within the GES.

“Our position is that if frontline directors are appointed from people who had gone through the mill within the service, it promotes fluidity and offers hope to officers of the service,” he said.

Mr Agbe-Carbonu said NAGRAT regarded the compulsory deduction of insurance premium from salaries of teachers for the GES-SIC Life Policy as instituted by the GES as “an attempt to bully teachers”.

He said the teachers had the right to choose which policy to subscribe to and had asked the GES to refund all the money deducted to their owners by the end of August this year.

He cautioned that “if GES does not heed this advice, teachers will withdraw their services from September 1, 2019.”