‘Nana, we love you but come again’ – A Plus takes on Otumfuo over 2022 budget 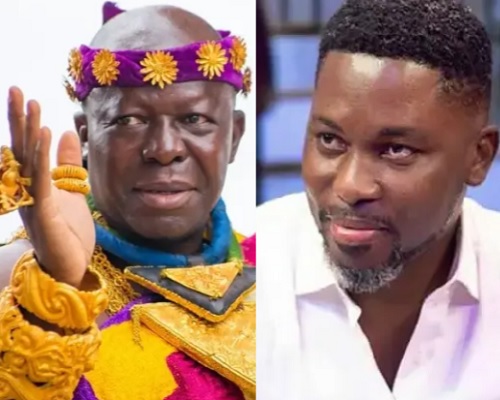 Otumfuo Osei Tutu II and Kwame A Plus

Kwame Asare Obeng, widely known as A Plus has crashed with the Asantehene, Otumfuo Osei Tutu II after the latter called on Ghanaians to pay their taxes and become good citizens.

It will be recalled that the Asantehene while speaking at the launch of his Commemorative Gold Coin on Sunday, December 12, 2021, said there’s no country in the world where citizens don’t pay taxes, adding that good citizens pay taxes.

According to him,  although no one loves paying taxes, there is no other way governments can raise revenue to meet the demands of the citizenry.

His comments come on the back of the raging controversy and widespread disapproval of the 1.75% levy on electronic financial transactions announced by the government in the 2022 budget statement.

“I do not know of any form of taxes that is less painful than others. So at last, government, by all means, would have to raise taxes to meet our needs and if we are good citizens, we will pay our taxes,” Otumfuo said at the event.

Reacting to the comments, however, A Plus told Otumfuo to make an assessment of his own statement and come again. He said Ghanaians cannot continue to pay taxes to a government that wastes state resources.

“So that the government will use it to rent expensive jets? Use some to import a stone from Israel where they don't believe in Jesus to build a cathedral? Not long ago our tax was used to build houses for judges. Akufo Addo spent over 20 million to demolished all the buildings to pave way for him to build a house for his sky daddy. Why should we pay taxes to a government that wants to use it to buy a jet so that the president can bath in the sky?

“Nana we love you but this one diɛ please come again. God bless you. Long live Otumfour,” A Plus posted on his Facebook page.