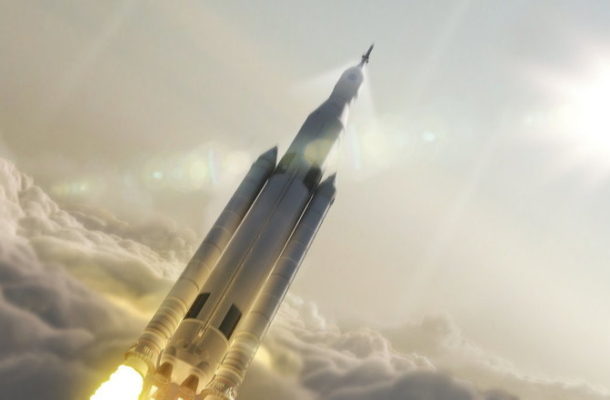 NASA's Space Launch System (SLS) super heavy rocket programme, under development by Boeing since 2011, is already nearly two years behind schedule, with the space agency concerned that it may have to consider the use of commercial rockets for an important series of Moon missions in the coming decade if the new rocket isn't created in time.

Look at this @NASA picture of the @NASA_SLS Intertank. On the left you can see cables. But in these other @NASA photos that specific region is blurred. Why?— pics from @NASASpaceflight pic.twitter.com/cH8QJr5B2i
— NASA Watch (@NASAWatch) 21 марта 2019 г.

Another example: Look at this @NASA picture of the @NASA_SLS Intertank. On the left you can see cables. But in the other @NASA photo that specific region is blurred. Why? pic.twitter.com/okYQQJUcdw
— NASA Watch (@NASAWatch) 21 марта 2019 г.

Here are more photos of the @NASA_SLS core stage Intertank that have been blurred by @NASA. Why are they doing this in some images — but not others? https://t.co/DdDzAkfBq4 pic.twitter.com/yEFroMJ5UO
— NASA Watch (@NASAWatch) 22 марта 2019 г.

More concerning to the site than the blurring was the fact that some images of the component were altered, while others weren't. When one user suggested that the blurring was a "pretty common" measure to prevent the leak of defence and military-related technologies known as International Traffic in Arms Regulations (ITAR) compliance, NASA Watch pointed out that if that were the case, all of the photos should have been blurred. "It either is ITAR compliance or it is not," the website, run by a former NASA employee, stressed.

Here are @NASA images of @NASA_SLS intertank section of the core stage without blurring. Why Is #NASA blurring other photos of the same hardware? https://t.co/DdDzAkfBq4 pic.twitter.com/o5rgJK8rUi
— NASA Watch (@NASAWatch) 22 марта 2019 г.

A NASA representative contacted by NASA Watch told the website that images were occasionally blurred by NASA and Boeing "export control representatives" to ensure that "certain sensitive hardware features" were not exposed.

"As hardware is completed, it becomes more sensitive in nature. NASA export control officers are taking another look at these images to determine whether they contain sensitive material or if it was so early in development that the feature shown was not sensitive," the spokesperson explained.

NASA Engineer: Saturn’s Moon Titan Could Be ‘An Awesome Place to Live’
Boeing's $12 billion Space Launch System programme, in development by Boeing since 2011, faced flak from lawmakers last week after NASA administrator Jim Bridenstine told a Senate committee that the SLS may not get off the ground in time for a planned 2020 Moon mission. Originally set to be delivered in 2018, the ambitious programme's timetable has since slipped to 2019, and, more recently, to 2020. In addition to timetable woes, experts, including NASA Watch, have expressed concerns regarding the system's skyrocketing costs, which are expected to run "several times" over the originally planned $1 billion per launch estimate.
Boeing is just one of several companies around the world working on a rocket intended to provide a super heavy-lift launch vehicle capacity for space exploration purposes, with Chinese and Russian engineers, as well as private US space corporation SpaceX working on their own designs. To date, the retired US Saturn V and Soviet Energia rockets retain the status of being the only rocket systems in the world with a proven payload capacity of 100 tonnes or more. Once in operation, SLS is expected to be able to lift between 95 and 130 tonnes into low-Earth orbit.Source: sputniknews.com