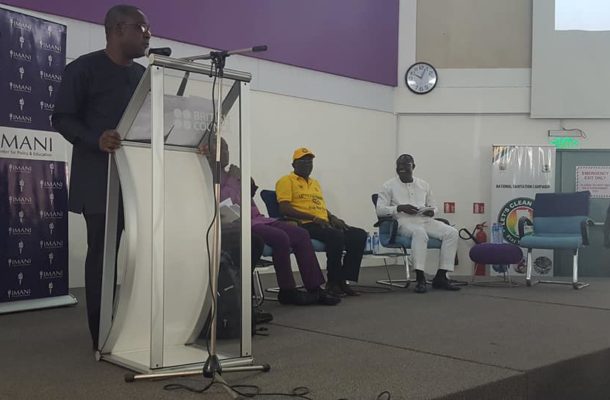 Mr Kofi Bentil was the moderator for the forume

Vice President of IMANI Ghana has described the national sanitation day program introduced by the erstwhile John Mahama administration as "an example of a failed system," urging the current government to fprmulate  a better waste management policy.

Mr Bentil says it is wrong for corporate heads, presidents, doctors, chief executives must leave their offices and enter the gutters or sweep the streets to keep the country clean.

The sanitation day was introduced in September 2012 by the John Mahama administration as part of the short-term strategy to deal with the country’s poor sanitation problem.

The programme, which was held the first Saturday of every month, was driven by the national sanitation task force to  chaired by the Minister of Local Government and Rural Development.

President Nana Akufo-Addo, upon assuming office in 2017,also  launched the National Sanitation Campaign on Monday with a call on all Ghanaians to treat every day as sanitation day.

His version of the sanitation fight is being to enforced by the  National Sanitation Brigade.

But Speaking as the moderator at sanitation forum organized by IMANI Ghana on Tuesday, Mr Bentil called for and end to Communal cleaning,saying  "it is not the panacea to the sanitation problem in the country".

“Communal cleaning, this thing about National Sanitation Day, this thing about getting officers, ministers, civil servants, doctors teachers from behind their desks to clean gutters, streets is wrong. It is bad. It is an example of a failed system. It is a position we hold at IMANI,” he said.

“The cost of getting civil servants from their desks to go and sweep the street is very high… It is a misapplication of resources."

“…If you put a doctor in a gutter and he gets typhoid and dies, that is a waste of a lot of money. Presidents have jumped into and the gutters and for 30 years those gutters are still not clean."

His assertions was however opposed by other stakeholders who attended the forum held at the British Council.

“The Chief Executives, doctors, the professionals are all managing offices, public places and their houses. If all of us deal with sanitation issues in our respective offices and houses, half of the problem will be solved,” said the Major of Accra,Mohammed Adjei Sowah.

"It is a way of telling them to wake-up. If you are a leader and you don’t make sure your surrounding is clean then you will be compelled to clean it.”

"The Sanitation programme, even though is not the solution to the poor sanitation, provides a symbolic gesture to get everybody involved in cleaning the country of filth.,added the Sanitation Minister, Kofi Adda.

It emeerged during the interaction session of the forume that the only landfill site in Accra is opened for 8 hours from 9am -5pm, which according to the  Accra Mayor,  is a contributing factor to the reason waste management in the capital city has been poor.