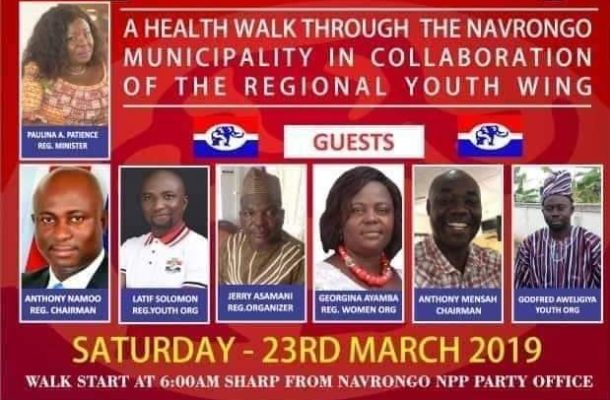 A poster that surfaced on Facebook on Friday advertising a planned New Patriotic Party (NPP) health walk in the Navrongo Central Constituency without photos of the Member of Parliament (MP) and Municipal Chief Executive (MCE) of the area has raised suspicions of disunity in the party at the constituency level.

The poster which was first shared on Facebook by one Amicus Justice Kweku Ayidah, a party sympathizer and tagging the constituency chairman, Anthony Spinoza Mensah, obviously to advertise the Saturday March 23rd event, had both names and photos of Joseph Kofi Adda and Williams Aduum missing, an indication that they are not part of the event intended to “sustain the change Ghanaians voted in 2016”.

The poster, however, had on it as guests, particulars and photos of some of the party’s regional and constituency executives and the Upper East Regional Minister, Paulina Patience Abayage. 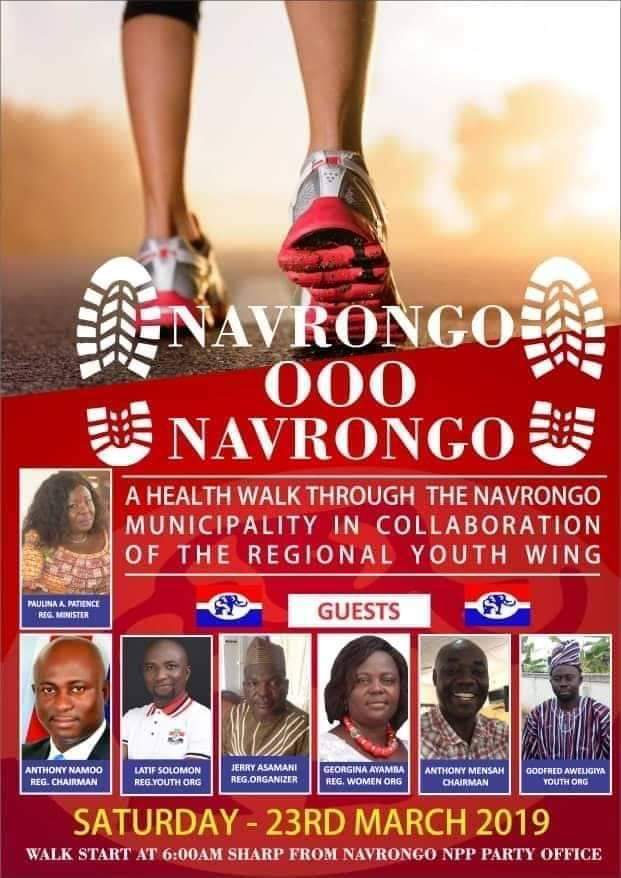 The development has since raised some questions on the popular social media platform as both constituents and party members want to know why and whether or not the MP and MCE have been invited to the event.

Although, it is unclear why organizers have chosen not to include the two strong party heavyweights, information available from deep throat sources indicate that the absence of Mr. Adda, who is said to have traveled out of the country on official assignment could be the reason for his exclusion.

Our source added that “the health walk is a foundation laying activity to stimulate support for ambassador Paulina Patience Abayage who has an eye for the Navrongo Central Constituency Parliamentary seat and that could also be another reason for not inviting the MP”.

The source continued that “the presence of Mr. Adda, in particular, may threaten the chances of Ambassador Abayage hence the intention to sideline the current MP”.

The latest development has further reiterated widespread rumour that all is not well at the camp of the Navrongo Central constituency wing of the New Patriotic Party.