NDC, The Brain Behind NPP’s Confusion 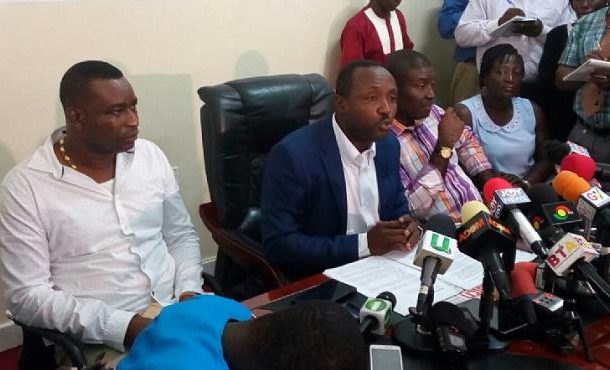 The New Patriotic Party (NPP) is blaming the governing National Democratic Congress (NDC) for the recent skirmishes within its rank and file.

At a news conference held at the party's headquarters in Accra, acting General Secretary of NPP, John Boadu, said evidence gathered points to the NDC as the sponsor and orchestrator of the bad press the party received over the last two years.

“Much of the problems in the New Patriotic Party were orchestrated, sponsored and fueled by the ruling party. Have you all noted that since 2016 the report of NPP on NPP have all stopped? This is so because the party took decisive measures to tackle those things,” he said.

Political activities in the country have peaked as Ghanaians prepare for the December 7 polls.

Both the NDC and NPP have been at each other’s throat in a bid to win the media war and also to win the hearts and minds of the electorate.

At a rally in the Northern Region, John Mahama, the flagbearer of the NDC who is also the president, told party supporters a vote for the NPP presidential candidate, is vote for a dictator and they must desist from that.

According to him, the NPP has become undemocratic under Mr Akufo-Addo with dissenting views silenced or shown the exit.

But the NPP said many of the chaos that happened in the party early last year were sponsored by the government.

Speaking to the issue on Joy FM's Top Story programme Thursday, Mr Boadu warned of possible “bloodbath” if the government continuously use the national security personnel to forment trouble within the NPP.

Mr Boadu said the glee with which the President talks about the NPP on his campaign trails is evident enough that he had a hand in what happened in the NPP.

“Already he has started with the focus of his recent campaign speeches, these attacks on the NPP and a deliberate dragging of the party's image in the mud has followed a clear pattern in the last year,” he complained. “Our worry is that the plot is getting bigger and more deadly.”

Mr Boadu said the democracy of the country stands to be “severely damaged” if focus is not brought to utterances of elements with the NDC.

Coordinator of NDC 2016 Campaign, Kofi Adams, has described the NPP claims as baseless. He said the NPP has kept the police busier than armed robbers have over the period.

The NPP has been quick to refer to the suspension of Kofi Adams by the NDC to justify why it had to suspend its own chairman and general secretary but Kofi Adams said the NPP cannot make such comparisons.

“My car was never smashed at party headquarters, acid was never poured on anybody in NDC and machetes used on any member of the NDC, all these happened in the NPP,” he said.

These he said are significantly different from what happened in the NDC which resulted in his suspension.