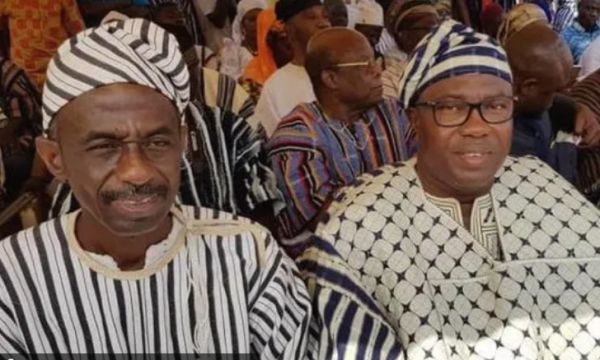 The general secretary of the opposition National Democratic Congress, Johnson Asiedu Nketiah, is poised to challenge the incumbent national chairman of the NDC, Samuel Ofosu-Ampofo, for the chairmanship in the NDC’s 2022 national executive elections.

Asiedu Nketiah was first elected general secretary of the NDC in November 2005 and has since then won all elections for the position.

Ofosu-Ampofo, on the other hand, was elected national chairman at the NDC’s ninth delegates’ congress, held at the Fantasy Dome of the Trade Fair Centre in Accra in November 2018. His main rivals for the post were Dan Abodakpi, Betty Mould Iddrisu, Alhaji Huudu Yahaya and Danny Annang.

Sources within the top echelons of the NDC who are familiar with the latest internal developments say that Asiedu Nketiah’s ambition is causing disquiet among the party rank and file.

Some political analysts believe that although Asiedu Nketiah would almost certainly be retained if he ran for NDC general secretary, his wish to move up is likely to be resisted fiercely, with Ofosu-Ampofo determined to hold on to the chairmanship.

Mahama’s choice
John Dramani Mahama, the NDC’s flagbearer in the 2012, 2016 and 2020 elections and the presumed leader of the party again, going in to Election 2024, reportedly has the support of both Asiedu Nketiah and Ofosu-Ampofo.

However, Mahama, according to sources in the NDC top leadership, prefers Ofosu-Ampofo to Asiedu Nketiah for the party’s national chairmanship.

Race for the executive
Under the NDC constitution, the party is required to elect national executives two years before every general election.

It is therefore expected that the NDC will next hold an national delegates’ congress to elect a national executive in November 2022.

Campaign activities for the internal elections will gather momentum from October onwards. All eyes will be on the top job of national chairman.

Profile of Ofosu-Ampofo
Samuel Ofosu-Ampofo was born on 1 March 1962. He is a former Member of Parliament as well as district chief executive for Fanteakwa North in the Eastern Region.

He previously served as the regional minister for the Eastern Region and national organiser of the National Democratic Congress.

Ofosu-Ampofo was also the minister of local government and rural development.

Asiedu Nketiah
Johnson Kwadwo Asiedu Nketiah, also known as General Mosquito, was born on 24 December 1956 at Seikwa, in the Brong-Ahafo Region, to the family of Kwaku Asiedu.

He gained admission to the School of Administration (now the Business School) at the University of Ghana, where he completed his education in 1986.

He also trained in petty trading and engaged in akpeteshie distilling and palm wine tapping, running a drinking bar owned by his uncle.

He is a former banker and MP and a trained teacher.

Asiedu Nketiah’s political career began in 1989 when he was elected to represent Seikwa in the first Wenchi District Assembly. He was also elected to the consultative assembly which drafted the 1992 constitution.

He first stood for election as MP for Wenchi West in 1992 and served as the local MP for 12 years.

During his time in Parliament, he served on several committees, such as those in charge of appointments, finance and public accounts. He was chairman of the committee on mines and energy, as well as the Minority spokesman on food, agriculture and cocoa affairs.

From 1997 to 2001, he served as a deputy minister of food and agriculture with special responsibility for crops. At the NDC delegates’ congress in December 2005, he won almost 80% of the votes to become the third general secretary of the party.

He was re-elected as NDC general secretary at the congress that took place in January 2010, securing 93% of the vote.