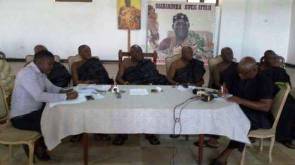 The Oguaa Traditional Council in the Central Region has rejected claims they were bribed by the governing National Democratic Congress (NDC), to lift an immature ban on drumming and noise making ahead of their annual Fetu Afahye festival to allow the party host its campaign launch in Cape Coast.

Tufuohene of the Oguaa Tradiational area, and a member of the Fetu Afahye planning committee, Nana Kwame Adu, bemoaned that “It’s unfortunate for somebody to allege that money has changed hands, people have been bribed and things like that. Do they have evidence empirically?”

NDC has scheduled to launch their campaign at the Cape Coast stadium on Sunday.

The Traditional Council on Friday lifted the ban though the deadline for its lifting was not due; a situation some residents of Cape Coast are angry about.

A resident who spoke to Citi News said: “It’s so sad and very disappointing.

It is very clear that they have taken that stance because of NDC which is uncalled for. It has made a joke of our festival. If they need the drum for political parties then there should not be any ban on drumming. The authorities have disappointed the entire Cape Coast people.”

But speaking to Richard Dela Sky on Eyewitness News, Nana Adu said the NDC approached them with explanations which they found reasonable for the lifting of the ban.

“This year’s planning committee for the Oguaa Fetu Afahye was made up of five chiefs and others making up the sixteen member committee. We were there when we received a petition from the NDC asking to launch their campaign at the Cape Coast Stadium. I don’t know whether they were aware of the ban, but when we read through we realized that it didn’t have the authority of the Traditional Council. We sat on it and realized that indeed the day they were seeking to launch their campaign falls within the ban.”

“We informed them that they could not be allowed to host the launch because it falls within the ban. They came again, they requested to meet the larger council and gave some reasons including history which showed that some of these bans have been lifted before in the past. They quoted PANEFEST in 1992 so when they brought our attention to the history aspect, we asked for time to consult other stakeholders,” he explained.

Nana Adu said they later put the issue before “the Asafoma, Supiis, Queen mothers and the fetish priests to go and divine and they came back confirming to the council in the absence of the NDC people that indeed there has been precedence.”

“They told us that if the NDC can perform about four rites, the ban could be lifted because one week had passed over the ban. They NDC agreed to perform the rites and in consultation with the fetish priest they brought out the entire requirement for the rites,” the Tufuohene added.

The Central Regional Secretary of the NDC, Sampson Ahianyo, had earlier lauded the lifting of the ban saying Cape Coast gods are reasonable.

“We are living with traditionalists and our gods don’t behave like witches and wizards, they are very reasonable. If you are really an African, you will agree with me that sometimes if there is something that is to be done in a particular area and the time is not right, you can go and pacify the gods, you consult the fetish priests to pray and ask for pacification, the gods will allow you to whatever you want.”

“The NDC did not do that, it is in the wisdom of the chiefs, the Okomfos and Asafo companies in Cape Coast who through their own wisdom had to consult, we proposed and they consulted, and the gods agreed. The NDC does not dictate to the chiefs of Cape Coast,” he added.