NDC gov’t not good at telling own story – Mahama 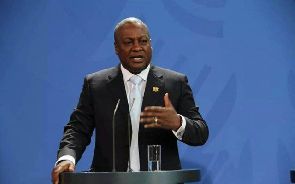 The governing National Democratic Congress (NDC) has been unable to effectively tell its success stories to the people of Ghana in order for them to appreciate the good works it has carried out, President John Dramani Mahama has said.

According to him, the NDC is not boastful but has rather always believed that Ghanaians will automatically see the good works being done by the government without government officials trumpeting those achievements.

His comments come at a time he has accused a section of the Ghanaian media of blocking news relating to the achievements of government from reaching the governed.

According to him, a certain group of people have taken control of the Ghanaian media and are standing in the way of the delivery of his government’s message, a situation he said made it difficult for people to know the truth.

He said: “It is populism, a certain group has taken control of the media in Ghana and it makes it difficult for people to discern the truth. So as much as you are putting out the information, it is either being blocked or distorted.”

However, Mr Mahama appears to have eaten back his own words by turning to blame the NDC party and government for not being good at telling its own stories.

Speaking during the launch of a Special Edition of the Ovation magazine at the Mövenpick Ambassador Hotel on Friday October 21, Mr Mahama said: “This evening, if you don’t hear my usual melodious voice, it’s because the stress of the campaign has affected me and I am nursing a cold. I guess I will be fine. I took a day off the campaign trail to attend to some businesses in Accra. First, to attend the funeral of somebody who has been like a mother to me, very interested in my progress in my career – Dr Mrs Mary Grant. I wish her farewell. And also to be here with you this evening for the launch of my good friend Dele Momodu’s (Chief Executive of the Ovation Magazine) special edition of the Ovation [magazine].

“I was touched by some of the things he said (regarding government’s achievements) because these were coming from the eyes of somebody who would not typically be considered as part of our partisan politics or even let’s say not a Ghanaian, and so it puts things in more context for me.

“Later, I was contacted by Ovation Magazine and they said they wanted to do a special coverage of some of the work [I] have been doing because ‘you [government] are not telling your story enough’ and it is true. One of the things we have not been good is telling our own story, probably because of the nature of who we are – not boastful and also believing that Ghanaians naturally know the work we are doing without you trumpeting it – and so I readily agreed (to grant the interview).”