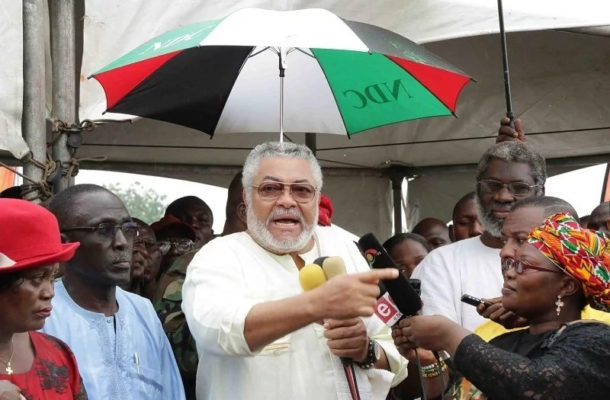 Former President Jerry John Rawlings has expressed his anxiety over election malpractices at the ongoing party election of executives in the various regions across the country.

His worries arises when he had receive complaints of malpractices in the constituency elections across the country.

He said such an act can cause the party to suffer a defeat in the 2020 elections.

He said, the act is on the "on the verge of breaking up the NDC if we pursue this path."

The founder of the National Democratic Congress (NDC) to seek reasons and solutions the problem invited the General Secretary og the Party, Johnson Asiedu Nketia to his office where he had highlighted complaints of the election malpractices he has heard of.

Asiedu Nketia had also added his voice saying that, the areas where there have such incidents will have to conduct the elections again.

Mr Rawlings stated that, he had observed, people in the party who are expected to be neutral and aiding in the free and fair party elections are rather championing the malpractices.

“I have observed that certain elements in the party who are supposed to be unbiased arbiters and supervisors in these elections are rather pursuing a parochial agenda that is not in the party’s interest. These limited victories are like winning a battle and losing the war. We witnessed this in the selection of our parliamentary candidates in the 2016 elections, which partly accounted for our humiliating defeat in that election.” He said.