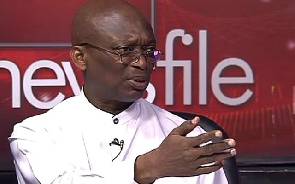 The Editor-in-Chief of the New Crusading Guide Newspaper, Abdul Malik Kweku Baako has chided the two leading political parties in Ghana, the ruling National Democratic Congress (NDC) and the largest opposition New Patriotic Party (NPP) for consciously or unconsciously eroding the reputation of the think-thank Institute of Economic Affairs.

Both parties declined to attend Presidential debate organized by the institution ahead of the December 7 election, which has become a regular feature in Ghana’s election beginning in 2000.

The NDC refused to make an appearance at the event because they claimed the IEA disrespected the party by not engaging party executives ahead of an official launch of the 2016 edition of the debate. The“IEA cannot disrespect the National Organiser of the party, it cannot disrespect the structures of the party. Let them continue to disrespect themselves and deal with individuals but the NDC is a very disciplined structure and nobody can disrespect us…We will not participate in the IEA debate, “Deputy General Secretary Koku Anyidoho noted in an interview.

The flagbearer of the NPP which didn’t oppose the programme, was expected to take his turn at the event in July but it was postponed. A later date of August 9, was postponed indefinitely by the IEA with no official reasons assigned to that decision.

However speaking on Joy FM’s News File show, Abdul Malik Kweku Baako stated that his independent checks reveal that Nana Akufo Addo will not make it to the IEA debate with a little over a month to the crucial election.

Expressing his displeasure over the NPP decision, he said “I’m so disappointed that the NPP and Nana Akufo Addo did not get onto the IEA platform…my own checks shows it is not going to happen. I do not think the NPP showed enough commitment, they gave all sorts of reasons about…we are waiting to deal with our manifesto before we come on board, two or three times, there is no formal letter from the NPP to the IEA as to the reasons why its candidate is not going to appear on the IEA platform. I say it’s a disappointment.

He condemned the two parties which are the front runners in the December 7 election of failing to consolidate the gains made by the local governance think-thank, adding that they should have known better.