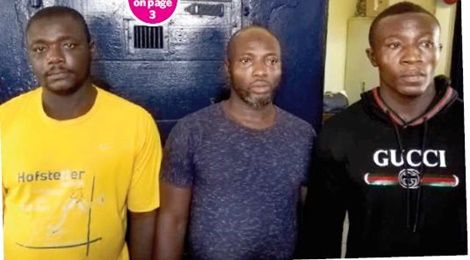 Three heavily-built men believed to be members of ‘The Hawks’, a vigilante group of the opposition National Democratic Congress (NDC), have been arrested by the police in Kumasi.

Dauda Ibrahim, aka Wayo, 40; Samuel Agyin, aka Rock, 32, and Abdul Ganiyu, alias Petit, 37, are being held in connection with the murder of Abdul Wasihu, 35, a member of the ‘Taskforce,’ a vigilante group of the same NDC, at the party’s Ashanti regional office at Amakom, Kumasi.

They were among 12 persons declared wanted by the Ashanti Regional Police Command for their alleged involvement in the fatal shooting of Wasihu on Monday, February 18, 2019, at the NDC’s regional office in Kumasi.

Apart from Wasihu, a top member of the NDC Taskforce, who was shot multiple times and killed instantly, another Taskforce member, identified as Abdul Rahman, aka West, was also hit by bullets and is said to be receiving treatment at the hospital.

Ashanti Regional Police Spokesperson ASP Godwin Ahianyo told the media at a press briefing yesterday that the trio turned themselves in on Thursday evening after a manhunt.

According to him, the suspects were being taken through investigation processes.

He stated that the police are on the heels of the remaining suspects, Abdul Bari Mohammed, alias Warrior; Midjima; Abu Taliban; Saani Mohammed, aka Commando; Gyafaru alias Element; Fuseini, aka Jah Rule; Demos, Fayiz and Suleiman, aka Akon.

ASP Ahinyo entreated the public to volunteer information that would lead to the arrest of the other suspects.

On February 18, the NDC Ashanti regional office in Kumasi was turned into a war zone, as the two rival vigilante groups engaged in a fierce shootout, resulting in the death of Wasihu.

The Hawks, according to the police, openly shot two members of the NDC Taskforce in Hollywood fashion in the full glare of the public.

At the time of the shooting, NDC national executives, including Samuel Ofosu Ampofo, Johnson Asiedu Nketia and Barbara Serwah Asamoah were meeting the Ashanti regional executives to restore peace.

They were holding the meeting to address the numerous problems facing the party in the various constituencies in the region when hell broke loose suddenly.

The national executives reportedly had to flee through windows to save their lives.