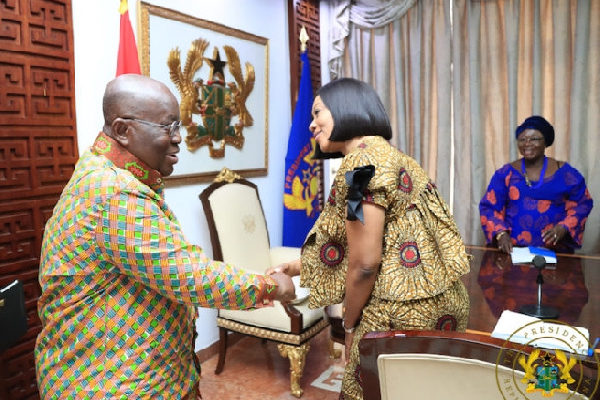 The brouhaha surrounding the new voters' register seems not to end anytime soon as the UK and Ireland chapter of the opposition National Democratic Congress (NDC) has waded into the debate claiming President Akufo-Addo has the intends to rig 2020 elections.

According to the chapter, Nana Akufo-Addo is putting pressure on Electoral Commission (EC) chairperson, Madam Jean Mensa to compile the new register aimed at rigging the 2020 general elections in his favour.

A statement signed by Mr Simon Aworigo dated Friday, 10 January 2020 urged the EC Chair to stand her ground and “not succumb to pressure from Mr Akufo-Addo to compile a new register of voters to rig election 2020”.

“Considering the pronouncements of Mr Akufo-Addo, his vice, Dr Mahamudu Bawumia, and other leading members such as the Majority Leader Osei Kyei-Mensah-Bonsu on the matter, the Chapter is left with no choice than to conclude that the Electoral Commission is under enormous pressure from government to rig the 2020 elections for the NPP”, the NDC said.

It noted that the Electoral Commission has a “sacred duty” imposed on it by the Constitution to conduct elections that are credible, free, fair and transparent. “This requires it to build consensus and stop taking unilateral decisions, influenced by undercurrents from the government”.

“They must consult all the political stakeholders and interest groups on the timing of important matters such as the compilation of a new register. This is important for the consolidation of our democratic governance”, the statement added, stressing: “The security and political stability of every democracy rests largely on the credibility and acceptability of the results at the polls”.

“It is for this reason that the UK and Ireland Chapter of the NDC is calling on Jean Mensa and Bossman Asare to put the safety, security and democracy of our country ahead of any other considerations in their decision to compile a new electoral roll”.

Thus far, the Chapter said, “the EC has not been convincing and persuasive enough nor logical in all its reasons for the need to compile a new register in this election year”.

The UK and Ireland Chapter of the NDC wondered why the EC would not wait for the 2020 census to be done in the second quarter of this year before making a decision as to whether or not a new electoral roll is needed since, in the party’s view, the census would provide credible data with which the EC can make a sound decision.

“Ghana will be conducting a population census sometime in April this year. It is public knowledge that an accurate register of voters depends on an accurate population figure. A population census gives the country a reliable population figure with all the accompanying demographics which can be relied upon to compile a new register”, the Chapter said, adding: “It is, therefore, unconscionable why the EC will want to run ahead of such reliable data and compile a new voter register now”.

“It is only logical and sensible for the EC to compile a new voter register after 2020 when the country will have produced a credible demographic data from the population census.

“It is also curious why the Jean Mensa and Bossman Asare-led Electoral Commission will insist on compiling a new register which we cannot test in any election before the general elections of 2020 so that whatever challenges exist can be cured.

“This rushed approach by the EC has the potential to disenfranchise millions of Ghanaians which will then amount to subverting the will of the people.

“We call on Akufo-Addo and his NPP to focus on delivering the over 300 promises they made to Ghanaians and not collude with the EC to rig the 2020 elections. Ghanaians will not accept this.

“We rise as citizens not spectators to fight the abuse of our democracy and institutions by Akufo Addo and the NPP.

“The right of Ghanaians to elect their leaders in a democracy must be strengthened not manipulated by a nonperforming government which insists on imposing itself on the people against their will”, the party noted.