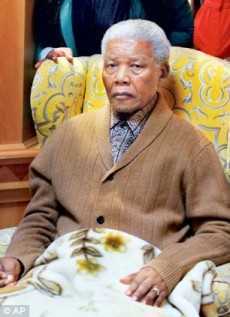 Fifteen people in South Africa are facing fraud charges relating to the funeral of the former president, Nelson Mandela, in 2013.

They include prominent members of the ruling African National Congress in the Eastern Cape province. They have not commented on the allegations.

Prosecutors accuse them of corruption and money-laundering amounting to nearly $700,000 (£500,000).
Mandela was the country's first black leader after apartheid ended in 1994.

The allegations first emerged in 2014, months after Mandela's funeral in Qunu, Eastern Cape, in December 2013, which was attended by heads of state from around the world.

Those facing charges include the health minister of Eastern Cape province, Sindiswa Gomba, a number of business figures, and other lawmakers from the governing ANC.

Prosecutors allege they made fraudulent claims for the transportation of mourners and venues used in the city of East London for memorial services.

They were granted bail and are expected to appear on 5 March.

"This matter is coming back to the roll after it was withdrawn in 2019 in order for the investigation to tighten up the loose ends and add more charges," Sipho Ngwema, the national spokesperson for the National Prosecuting Authority, was quoted as saying by news site EWN.