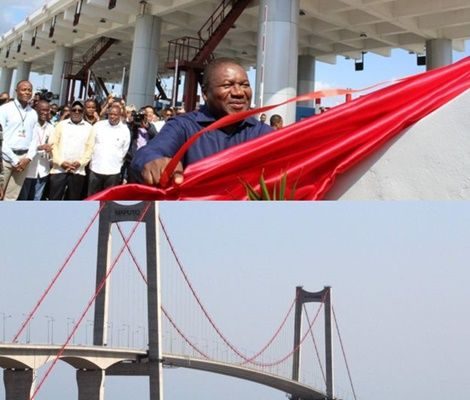 Mozambique President Filipe Nyusi has opened a new Chinese-built suspension bridge worth more than $750m (£576m) in the capital Maputo.

The 150m tall bridge, begun in June 2014, links the north and south of Maputo Bay which until now could only be crossed by boat.

Many Mozambiquans are complaining about a charge of nearly $3 to cross.

China has invested heavily in Mozambique's infrastructure but there are concerns about its debt.

Mr Nyusi said the bridge, which was a dream of former president Samora Machel, would help promote tourism to the country.

"With the completion of this bridge... the connection of southern Africa to the north over land and across our country is guaranteed," he said.

Some 700m in length and with two ramps more than 2km long each, it is also part of a project linking Maputo directly with South Africa by road for the first time.