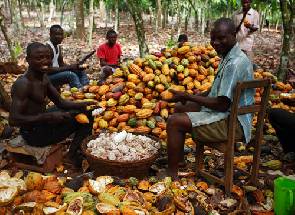 Cocobod has announced that the 11.76% increase in the producer price of cocoa for the 2016/2016 crop season is to motivate farmers and also curb the smuggling of the commodity to neighbouring La Cote D’Ivoire.

“The new prices are meant to motivate the farmers. Most of the farmers were waiting for the new prices to come out before selling their produce and the new price will continue to end of September 2017,” Public Affairs Manager of Cocobod, Noah Amenya noted in an interview with Accra FM on Monday.

A deputy Minister of Finance, Cassel Ato Forson on Saturday announced an 11.76% increase in the producer price of cocoa for the 2016/2017 crop season at the national celebration of the International Cocoa Day at Tepa in the Ahafo Ano North District of the Ashanti Region.

With the new price increase, a ton of cocoa which was selling at GH?6,800 in the previous crop season has moved up to GH?7,600.

However, some farmers in the Ashanti Region are not content with the price increment, insisting the prevailing price of cocoa on the world market is not a true reflection of what was announced by the deputy Minister.

But Amenya reacting to the issue said the new price increase is “far” better than the prevailing market price in neighbouring La Cote D’Ivoire.

“We couldn’t have increased the price of cocoa more than what was announced by the Ministry of Finance. There is a world price which needed to be sustained at the local level. All these were factored before arriving at the new price which we believe could be sustained”, he noted.