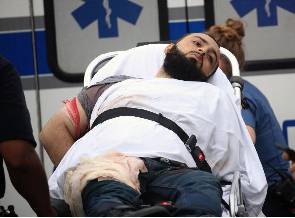 A notebook found on New York and New Jersey bombings suspect Ahmad Khan Rahami contained ramblings about terrorists and also mentioned Anwar al-Awlaki, the Yemeni-American imam who was a spokesman for al Qaeda in the Arabian Peninsula, according to a law enforcement official.

The notebook, which also referred to the Boston Marathon bombers, had a bullet hole; it's not clear whether that occurred during Monday's shootout between police and Rahami.

The reference to Awlaki, who was killed in 2011 and has been a source of inspiration for many terrorist attacks, appears to help bolster an emerging view among investigators that the weekend attacks weren't ISIS-inspired.

What was his motive? Was he working alone? What did his wife know? Why did he make lengthy trips to Afghanistan and Pakistan?

These are among the questions that have emerged in the wake of the capture of the man suspected of planting bombs in New York and New Jersey over the weekend.

Ahmad Khan Rahami, 28, is "directly linked" to bombings Saturday in New York City and Seaside Park, New Jersey, authorities said, and is believed to be connected to pipe bombs found in a backpack Sunday night in Elizabeth, New Jersey.

Ahmad Khan Rahami was wounded in a shootout with police in Linden, New Jersey.

Rahami was not initially cooperative with police who tried to interview him, a law enforcement official said. His bail has been set at $5.2 million.

Authorities also want to speak to his wife, who left the United States a few days before the bombings, a law enforcement official said on condition of anonymity.

The official didn't provide details about her travels but said authorities are working with officials in Pakistan and the United Arab Emirates to gain access to her.

Rahami was captured after the owner of a bar in Linden, New Jersey, found him sleeping in the doorway of his bar Monday morning. Harinder Bains, owner of Merdie's Tavern, recognized Rahami after watching CNN on his laptop and called police.

When officers responded, Rahami pulled out a handgun and opened fire, striking an officer in his protective vest over his chest. A foot chase ensued, during which Rahami shot at a police car, causing a bullet to graze another officer in the face.

The chase ended when Rahami was shot multiple times. He was taken to a hospital for surgery.

Authorities believe the "main guy" has been caught but the investigation continues to determine if Rahami had help, sources told CNN.

Initially, a garbage can explosion at a Marine Corps charity race in Seaside Park, New Jersey, Saturday morning seemed to be an isolated incident. No one was injured, and two other unexploded bombs were found nearby.

Then an explosion Saturday night in New York's Chelsea neighborhood injured 29 people. As law enforcement cordoned off the area, investigators found a pressure cooker with wires coming out of it four blocks away.

Surveillance video showed a man believed to be Rahami dragging what appeared to be a duffel bag with wheels near the site of the West 23rd Street explosion about 40 minutes before the blast, according to local and federal law enforcement sources.

About 10 minutes later, surveillance video showed the same man with the same duffel bag on West 27th Street, near the site of the second bomb.

A device at a second location in Chelsea appears to be a pressure cooker. Rahami was identified Sunday afternoon through a fingerprint, a senior law enforcement official said. Evidence from the cell phone on the pressure cooker also led to Rahami's identification.

His last known address was in Elizabeth, the same city where the backpack with explosives was found Sunday night.

The backpack, which contained five bombs, was found in a wastebasket around 9:30 p.m. on Sunday outside a neighborhood pub in Elizabeth, about 16 miles from New York City.

As bomb technicians deployed a robot to examine the devices, one of the bombs detonated.

Who is the suspect, and what did his wife know?

Rahami first came to the United States in 1995 as a child, after his father arrived seeking asylum, and became a naturalized US citizen in 2011, according to a law enforcement official who reviewed his travel and immigration record.

Ahmad Khan Rahami: What we know about the bombing suspect

Rahami traveled for extended periods to Afghanistan and Pakistan in the last five years, officials said. While in Pakistan in July 2011, he married a Pakistani woman. Two years later, in April 2013, he went to Pakistan and remained there until March 2014, visiting Afghanistan before returning to the United States.

Upon returning from both visits he told officials he was visiting family, satisfying any concerns immigration officials had at the time.

His family runs First American Fried Chicken in Elizabeth, Mayor Chris Bollwage said. The family has a history of clashes with the community over the restaurant, which used to be open 24 hours a day, Bollwage added.

In 2011, the family sued the city and its police department, alleging discrimination and harassment against Muslims stemming from disputes over the restaurant's hours. Investigators searched the building on Monday, the mayor said.

Life in Chelsea one day after the New York bombing

Substantial police presence notwithstanding, life in New York appears to have returned to normal. Authorities had heightened security across the city as it hosts world leaders at the United Nations General Assembly this week.

People in the region are tough and resilient, President Barack Obama said on Monday.