NHIS would have collapsed in 2010; we extended its life – Mahama 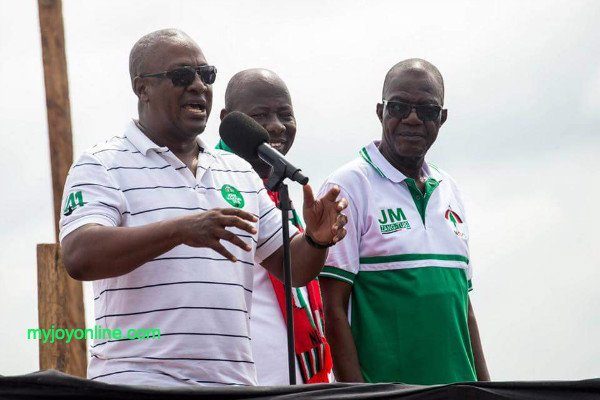 President John Mahama says the National Health Insurance Scheme (NHIS) is growing from strength to strength, disputing claims by the opposition that it has collapsed.

According to him, in 2014 government spent GH¢1 billion for the treatment of NHIS patients which was significantly higher than GH¢183 million spent by the New Patriotic Party (NPP) in 2008.

“Our political opponents say NHIS has collapsed [but] we have spent more on facilities providing treatment to patients in the country than the NPP did,” he told supporters of the governing National Democratic Congress (NDC).

President made this comment on Monday when he addressed supporters of the governing National Democratic Congress (NDC) in the Northern Regional town of Salaga during his 2016 campaign tour.

The NPP has accused government of collapsing NHIS – a scheme that was introduced during the erstwhile NPP-led-Kufuor administration.

NPP flagbearer, Nana Addo Dankwa Akufo-Addo, says when given the mandate in the upcoming election, he will revive the scheme.

“I am coming to revive the National Health Insurance Scheme, which ensured that the poor in society gained access to healthcare without the financial burden which used to be associated with healthcare delivery [under the cash and carry regime],” he told NPP supporters of Dormaa West in the Brong Ahafo Region.

He explained when former President Kufuor introduced the programme, it was aimed at making healthcare accessible and affordable but the NDC has defeated the concept by collapsing the system.

But in his reaction, President Mahama said his government has exhibited more commitment to the scheme than was done by the NPP.

He said when the NHIS was introduced by the NPP the prediction was that the scheme was going to collapse in 2010, but when they took over one of their decisions was to extend the life of the National Health Insurance Authority.

He said under his leadership NHIS patients visitation has grown from nine million to 29 million.

On challenges of residents of Salaga:

President Mahama assured residents of Salaga his government will build the town to regain its role in a business transaction in the continent.

“This was the biggest commercial center in the whole Africa of and we want Salaga to recapture its glory days," he said.

With a grasp of the three main challenges of residents, he said, he will ensure that the roads, hospitals and water are provided for the people of Salaga.

"For water, it is a problem between me and the women because they go to a long distance to fetch water. As for the roads they have been given on contract," he added.