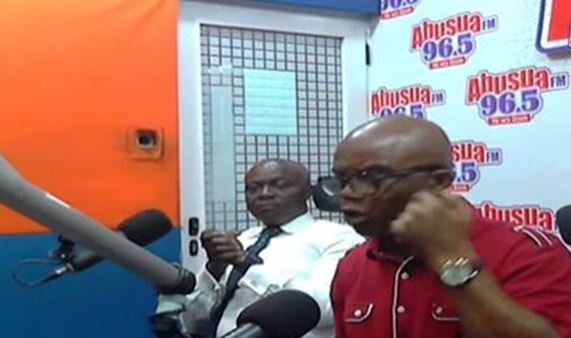 What seemed like an attempt by Kumasi-based Abusua FM to resolve the differences between the Member of Parliament for Nhyiaeso, Dr Stephen Amoah, and one of his kingmakers in the constituency, Abraham Boadi, alias Opoo Man, backfired after the two men lost their cool on live radio.

Dr Stephen Amoah, alias Sticka, and Opoo Man exchanged some heated words after the latter made certain remarks which ruffled the MP.

Per the narrative by both the MP and Opoo Man who the MP admits was a key member of his campaign team, their relationship broke down over trust issues.

Recounting the incident that caused irreparable damage to their relationship, the firebrand NPP MP said his team member was unhappy that he had extended an olive branch to some members of the New Patriotic Party who openly campaigned against him.

“After the elections, we had to attend a funeral at South Suntreso and the party informed me. I called my brother Opoo Man and Wanege but Opoo Man couldn’t come. Then my people started questioning why I would attend a funeral with the someone (the constituency chairman) who campaigned against me. This how everything started. I told them I’m an MP and Joe Card is a chairman so whether I like it or not, we have to work together so we all should come together.

“On our team platform, Opoo started saying some things so I called him. He claims he called me to advise me and I never listened, it’s not true.”

This claim by the Nyhiaeso MP prompted a reaction from Opoo Man who began yelling and making some claims against the MP.

Stephen Amoah who initially kept his cool lost it after his campaign member accused him of being an ingrate.

The exchange got heated and Opoo Man walked off the show but Stephen Amoah resumed calmness and continued with the narration of his version of the story.

Later, Opoo Man returned and told his version, with a flurry of accusations against Stephen Amoah.

Watch the incident below