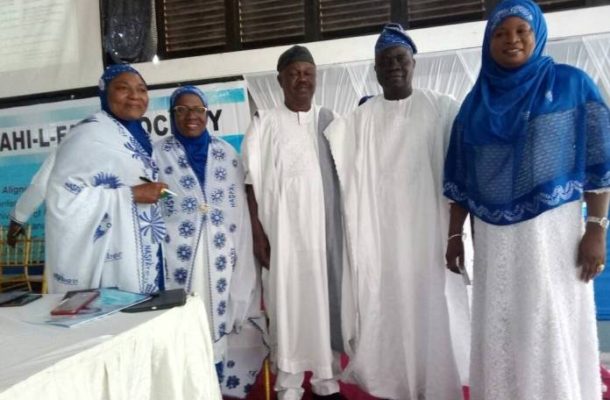 Governor Aregbesola beieves achievements made by NASPA  so far in the area of Dawah, education, economic empowerment among others are worth emulating.

In a speech read on his behalf  by represented by Nigeria's Commissioner for Education, Mr. Abdul-Wasiu Omotunde-Young, at the 4th NASFAT’s Biennial Conference in Accra-Ghana,he  called management of on Islamic societal organisation to remain focused by inviting people to all that is good.

The event also the Nigerian High Commissioner to Ghana, Ambassador Femi Abikoye who said he was full of joy for having such a huge conference in Ghana.

"We have a lot of areas of collaboration. NASFAT has done several million naira worth of bilateral relations with this conference. You have also done well in improving the socio-economic, trade, investment and religious relationship."

Speaking on the topic, ‘Managing the Expansion of Dawah’, Sheikh Hassan said that Muslims should be more organized and united in order to grow the Ummah.

He said, “As Ummah, we need to work collectively, share good practices and utilise our talents maximally to make progress. What we do is more important than what we say and we must practice the true teachings of Islam.”

Sheikh Hassan warned against describing terrorists as Muslim terrorists, asking the audience to be careful of biased reporting.

In his address, the President of NASFAT, Engr. Kamil Bolarinwa said that diversity should not in any way undermine the practice and observance of our religion.

He said, “We need to be models of positive values such as tolerance, peace, justice, equity, respect for others, integrity and the likes.”

He called on Muslim elites to do more for Islam.

“NASFAT is committed to continuing quality education in all areas,” he said. “And that’s why we set up Fountain University and intend to make it one of the best in the world.”

Alhaji Abdul-Lateef Olasupo, NASFAT’s BOT Chairman, in his welcome address urged members to continue to serve Allah through service to humanity with their resources.

He said, “We must continually strive to be enthusiastic missionaries, share the good values and develop the distinguishing competencies in members.”

NASFAT, which has its roots from Nigeria has been operating in Ghana as benevolent groups for more than 10 years.

its major focus of the group is individual morality and piety along with education and socio-economic empowerment of its members.