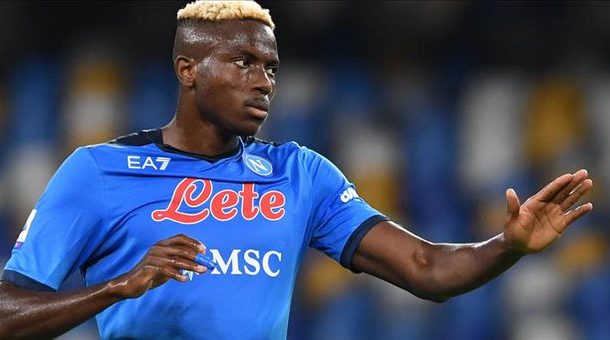 Nigeria striker Victor Osimhen has cancelled a planned trip to Italy to assess his cheekbone injury after contracting coronavirus for a second time.

The 23-year-old returned a positive test in Nigeria ahead of his trip to Naples, but is asymptomatic according to a statement by the Serie A outfit.

"Consequently, the local authorities have ordered that Osimhen self-isolate and the check-up will be rescheduled after he has tested negative and his period of isolation ends," Napoli's statement added.

Osimhen, whose latest positive test comes just 12 days before Nigeria's opening game at the Africa Cup of Nations, will isolate for at least one week in line with public health protocols.

BBC Sport Africa understands that the player, included in his country's final 28-man squad after declaring himself fit to play in the continental showpiece event, is still expected to join up with the Super Eagles ahead of the trip to Cameroon.

Osimhen suffered facial fractures after a clash of heads with Inter Milan's Milan Skriniar on 21 November and required titanium plates and screws to be affixed to his cheekbone and eye socket.

Napoli's initial assessment was that the player would be out for three months but the forward returned to training two weeks ago wearing a protective mask, giving him a chance of making the Nations Cup.

The former youth international was in a good run of form prior to his injury, with nine goals and two assists for Napoli this season as well as four goals for Nigeria in 2022 World Cup qualifying.

Osimhen is the latest Cameroon-bound player to suffer a coronavirus-related setback ahead of the tournament, which kicks off on 9 January.