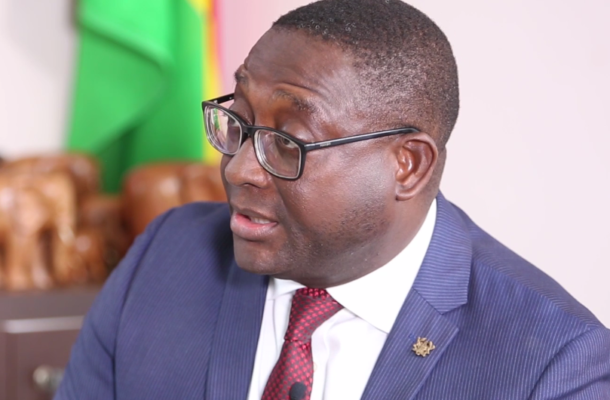 The New Patriotic Party has dismissed allegations by the Special Prosecutor, Martin Amidu, that government officials including President Nana Addo Dankwa Akufo-Addo interfered with his office leading to his exit.

Mr. Amidu resigned as the Special Prosecutor on Monday claiming that government officials and the presidency were interfering with the independence of his office.

Mr. Amidu in a resignation letter to the President said “I should not ordinarily be announcing my resignation to the public myself but the traumatic experience I went through from 20th October 2020 to 2nd November 2020 when I conveyed in a thirteen (13) page letter the conclusions and observations on the analysis of the risk of corruption and anti-corruption assessment on the Report On Agyapa Royalties Limited Transactions and Other Matters Related Thereto to the President as Chairman of the National Security Council cautions against not bringing my resignation as the Special Prosecutor with immediate to the notice of the Ghanaian public and the world.

“The reaction I received for daring to produce the Agyapa Royalties Limited Transactions anti-corruption report convinces me beyond any reasonable doubt that I was not intended to exercise any independence as the Special Prosecutor in the prevention, investigation, prosecution, and recovery of assets of corruption. My position as the Special Prosecutor has consequently become clearly untenable,” a part of the resignation letter said.

But a statement signed by Communications Director, Yaw Buaben Asamoah stated that Mr. Amidu was exaggerating the alleged interference in his work by the President.

The party describing Mr. Amidu’s exit as shocking also stated that the Special Prosecutor “chose to walk away from the golden opportunity of establishing a brand new effective agency, having had the best part of three years to demonstrate and cement his undoubted anti-corruption credentials in doing so.”
“Mr. Amidu has not resigned because any investigation of his has been interfered with by the Presidency or any member of the government. Since 2018, he has been offered all the room and support he needed by law and mandate and every money he has requested to set up an entirely new institution, which comes with its own challenges, and to operate the Office independently and efficiently. No political office holder has interfered in the administration of that Office.”

Below is the full statement by the NPP

The New Patriotic Party (NPP) has received with shock and dismay, the news of the resignation of the Special Prosecutor, Martin Amidu.

Shock because Mr. Amidu chose to walk away from the golden opportunity of establishing a brand new effective agency, having had the best part of three years to demonstrate and cement his undoubted anti-corruption credentials in doing so. The Presidency and the Ministry of Finance, the evidence indicates clearly, has done everything to make the OSP operational, effective and independent. The decision to appoint Martin Amidu himself is a clear indication that the President did not intend for the Office to be headed by a lackey.

We remember those who lacked the courage to implement their own manifesto pledge. The National Democratic Congress gave a manifesto promise to separate the Attorney General Department from the Ministry of Justice to give the AG the independence to prosecute corruption cases without fear or favour. But, when they were given the power to act they lacked the courage to do so. That has not been the case with Nana Akufo-Addo and the NPP.

We remember in 2012 when Martin Amidu, who described the NDC of undertaking “gargantuan corruption”, was sacked by President John Evans Atta Mills. The Chief of Staff justified it with a statement that Martin Amidu “misconducted himself” as Attorney General in a meeting with President Mills. But, Martin disagreed and accused President Mills of “interfering” with the AG’s “prosecutorial powers under the Constitution in relation to three dockets…” Thankfully, that era is behind us.

Ghanaians admired Martin Amidu’s subsequent role as “Citizen Vigilante” and it was because of this fierce sense of independence and experience as a prosecutor that apparently persuaded President Akufo-Addo to nominate Martin Amidu, a long-standing leading member of the NDC to be the first Special Prosecutor. Even then, the NDC fought against the appointment at the Supreme Court but without success.

Mr Amidu has not resigned because any investigation of his has been interfered with by the Presidency or any member of government. Since 2018, he has been offered all the room and support he needed by law and mandate and every money he has requested to set up an entirely new institution, which comes with its own challenges, and to operate the Office independently and efficiently. No political office holder has interfered in the administration of that Office.

Indeed, that his actions appear to impact both the incumbent and immediate past governments vindicates the wisdom of the mandate and powers of the Office which he occupied. An Office hinged on independence of thought and action.

Independence cannot be infallible. Independence does not mean the actions of the Office cannot be commented upon by the people as has happened with Mr Amidu’s report on Agyapa.

Also, for the OSP to work well, the principles of natural justice must be respected at all times. Mr. Amidu’s letter of resignation, it would appear that he chose to resign because H.E the President sought to apply “Audi Alteram Partem” rules to enable the Hon. Finance Minister state his case after an anti-corruption risk and corruption risk assessment report was done on Agyapa and the Minister’s role in it assessed and conclusions reached without giving the Minister the prior opportunity to explain matters beyond the documents assessed.

In short, the very independence and authority of the Office demand that its conclusions hold up to scrutiny. In this regard, much as the Office has the power and right to issue the Report, the recipient President also had a duty to engage the Hon. Minister of Finance, who in his Memo requested by the President in response, clearly engages very transparently on the issues raised in the report.

We are at a loss as to how this can be stretched to mean interference. There is nothing said or done that stopped the Special Prosecutor from going ahead to undertake a full and proper investigation of Agyapa beyond the assessment done. All he had to do was continue his mandate to undertake an investigation and continue with prosecution if a prima facie case could be established. Otherwise, Mr Amidu’s apparently noble gesture of resignation, may, sadly, smack of political grandstanding.

The NPP believes the President has been forthright, sincere and honest in his conviction to fight against corruption. The approach of the OSP by way of an advisory assessment is novel, and therefore all the more significant that the President was very responsive to the letter sent to him by the SP.
For the NPP led Government, the vindication of the President’s believe in the need for an independent office with sufficient power to act in the public realm, irrespective of status, implies major progress in fighting corruption. Not only is the OSP independent of all political influence, it is also capable of initiating its own actions. As the Special Prosecutor himself says in the report;

“This is the first time an independent anti-corruption agency established by any Government in Ghana has undertaken an analysis of the risk of corruption and anti-corruption risk assessment of the processes leading up to the approval by Parliament of Public Agreements as part of its statutory mandate. This has been made possible by the courage and commitment of H.E. the President of Ghana in redeeming the promise he made to Ghanaians when he was a Presidential candidate of a political party to establish an independent anti-corruption statutory entity to make meaningful any real commitment to prevent and to fight corruption. The Office of the Special Prosecutor Act, 2017 (Act 959) established this Office. The President ensured that in the teeth of strong opposition the Special Prosecutor was able to have his way to have included in the Office of the Special Prosecutor (Operations) Regulations, 2018 (L.I. 2374) the prevention of corruption regulations which to the best of my knowledge may be the first in Africa and meets international standards and best practices.”

Where then is the accusation of “poodle” affirmed? Our society, especially the political strata, needs to move away from merely shouting about who is the most corrupt and actually begin to fight corruption on a sustainable basis. League tabling corruption does not work. But the recitation and shouting loudest does not solve the political corruption problem of impunity that leads to blatant procurement and resource management issues.

The NPP insists that we have a better claim to good governance. We hold CSOs as our natural ally in delivering good governance and therefore must lay out the situation is it presumably is. Stated bluntly, the current NDC leadership record on anti-corruption is probably the worst ever. Their record on institutional strengthening is abysmal, as evidenced by the Audit Service Activity Report of 2014 lamenting the lack of financial and logistical support since 2012, thereby hampering their work. Their record on anti-corruption legislation is weak, the PFM having been passed under pressure, with massive abuses of sole sourcing under the legal procurement regime put in by the Kufuor administration. The highlight of NDC perfidy is the interoperability process where NDC was giving Ghana a bill of $1.2 billion. The NPP did it for $4.2 million.

The NDC’s record on current strategy is non-existent, with their manifesto talking about ‘operation sting’ without any legs. The man they expect to lead this ‘sting’ is, according to Martin Amidu, the same Government Official One. There is no detail about the potential legal and institutional structure of operation sting, how it will differ from what we have, the gaps it’s supposed to fill and the ‘men from Mars’ who would drive it. In fact, they have no idea what their own operation sting is about.

Contrast that with the NPP’s record. Cumulatively, from the era of President Kufuor, we have major transparency enhancing legislation, or sunshine legislation and case law being developed. Internal Audit, Procurement, OSP, RTI and the reformed Companies Act to mention but a few. Kufuor rightly diagnosed public procurement as a problem, whilst Nana Addo determined to assault impunity once and for all. Between clean procurement and reduced impunity, Ghana’s fight against corruption would be over.

Beyond the OSP, with the setup of the Right to Information Commission, President Nana Addo Dankwa Akufo-Addo has set the stage for a deeper, reflective and sustainable culture of transparency and accountability. The NPP is assured that H.E the President has created the largest space for civil society participation in governance in the Fourth Republic. As architect of the repeal of criminal libel under President Kufuor, he enabled the media to modernise and blossom, creating not only a culture of aggressive inquiry into public affairs but also numerous jobs and opportunities for growth and self-actualisation.

The NPP urges H.E the President to accept the resignation of the Special Prosecutor and initiate processes to find a successor to continue the sensitive and important job of realising the true ambit of the powers of the OSP in order to ensure the success of the fight against corruption.