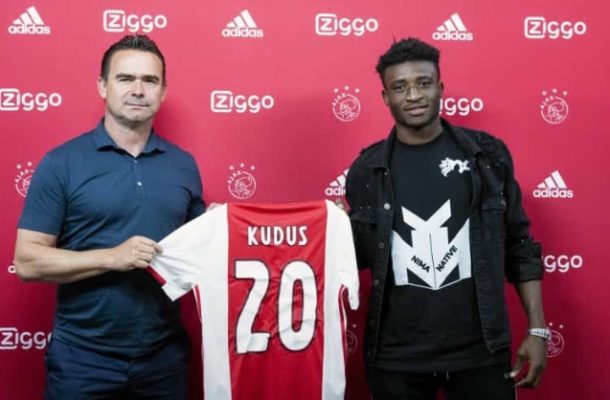 Ghanaian trainer and FC Nordsjælland youth team coach, Mas'Ud Didi Dramani has tipped compatriot Kudus Mohammed for greatness claiming that the newly signed Ajax star will turn out to be one of the best players in the world because of the level of training and development he has been given over the years.

Kudus, 19,  joined the Eredivise giants on a five-year deal on Thursday after agreeing a deal worth nine million euros with his Danish club.

Didi Dramani, who has been one of the coaches to have played a vital role in the development of the youngster believes Ajax will refine him into a world-class player.

Speaking in an interview with Happy FM in Accra, the former Black Maidens trainer said, “Kudus Mohammed has fully developed well and I believe that Ajax is the gateway. He chose the right option to join Ajax despite the several offers from top European clubs.

“Ajax will refine him and that they will also prepare him for the top European football. Ajax is one of the best clubs in Europe that play good football and also develop young players.

“He will turn up to be a world-class player because of the transition we have given him here at Nordsjælland”, he added.

Mohammed Kudus after completing his move to Ajax said, “Ajax is a special place with a special culture and a new challenge and opportunity for development.

“I look forward to this and to fulfil the KudusDream. I owe this to all the staff and teammates at FCN and Right to Dream”

Mohammed has been one of the most prolific teenagers in Denmark, scoring 12 goals in 25 appearances for Nordsjælland this season.