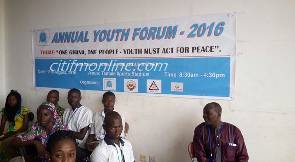 The youth of Northern Region have served notice they will at the December 7 polls vote against politicians found culpable of using hate speech in the media landscape.

According to them, they are fed up with the chieftaincy, political, land and other related needless conflicts which have over the years thwarted the region’s transformational agenda.

They have therefore admonished such politicians to desist from their ill-mannered behavior likely to plunge the nation into chaos ahead of the forthcoming elections.

They cited the Rwanda genocide, the Kenyan and Cote D’I Voire political crisis as a litmus test for Ghanaian politicians to be civil on their campaign platforms.

The unhappy future leaders of the Northern Region raised the red flag on the rising political tension in the country at the Annual National Youth Forum held in Tamale.

The event celebrated under the theme, “One Ghana, One People, Youth Must Act for Peace,” brought together youth and other stakeholders from some identified political hotspots across the Northern Region.

The event was under the auspices of three Non Governmental Organizations, the Youth Empowerment for Life (YEfL), the Centre for Active Learning and Integrated Development (CALID), Youth Network for Sustainable Development (YNSD) in collaboration with the National Youth Authority (NYA).

It formed part of their civic responsibility to facilitate youth involvement in a peaceful and credible electioneering process.

The participants posited that all political players contesting the December 7 polls should put the national cohesion against their parochial interest.

“We agree that Ghanaians cannot afford to compromise on the peace we are enjoying under our democratic dispensation and that all stakeholders in this year’s elections have a duty to ensure that peace prevails before, during and after the elections in Ghana.”

“To maintain peace before, during and after the elections, we the youth have resolved to commit to promoting unity in the region.”
 
“We will work collectively to prevent tendencies that could divide the youth and the people of this region at large,” they promised.

A Member of the National Peace Council who doubles as the Arch Bishop of the Yendi Catholic Diocese, Bishop Vincent Sowah Boi-Nai expressed misgivings about politicians’ use of intemperate language on the airwaves.

He said peace without justice is meaningless and thus impressed upon the major stakeholders in the 2016 electioneering processes to be fair and transparent.

He inspired the participants to work hard and change the widespread misconception that the Northern Region is characteristic of violence.

Bishop Boi-Nai urged the youth to embrace dialogue as the panacea to solving their impasse saying, “Don’t settle your differences through violence, rather use dialogue.”

The peace Icon revealed that the Yendi Peace Centre has so far successfully organized 15 workshops meant to promote peace and unity in the Eastern Corridor where conflicts are prevalent.

Board Chairman of the Youth Empowerment for Life, Alhassan Abdul Ganiyu reaffirmed the organization’s strive to empower the youth through peaceful co-existence.

He admonished the participants to take advantage of such platforms and serve as peace Ambassadors in their localities.

He kicked against any move by the youth to join the bandwagon of vulgar politicians whose actions could endanger the nation’s harmony.