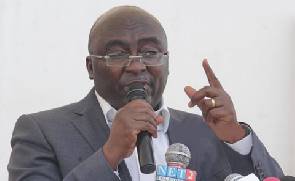 “All these three authorities will be reporting to the Office of the President, and they will be the vehicles for the implementation of the Infrastructure for Poverty Eradication Programme,” he said.

Dr Bawumia made this known on Thursday, September 1 while addressing residents of Saboba on Day 3 of Nana Akufo-Addo’s tour of the Northern Region. Over the week, the economist announced his party’s move to allocate $275 million per year to each constituency under IPEP if it comes to power.

He explained that IPEP “is the new approach to poverty eradication. We are not going to let the money stay in Accra for people to steal it. We are going to directly allocate it and you, in the various constituencies, will then decide what to use the money for”.

There have been questions raised over the source of funding for the seemingly ambitious policies announced by the opposition party. Dr Bawumia explained that “this programme is not going to use new money, so nobody should ask us where we are getting the money from.

The money is already there”. He added that an Akufo-Addo government is going to “reallocate the money in Ghana’s capital expenditure budget, and stop people chopping the money and taking it to Dubai and Burkina Faso.

That (capital expenditure) budget, this year, is US$1.6 billion. We are saying that we have too many poor people all around the country, and when they (government) spend monies in the capital budget, it never gets to the ground”.