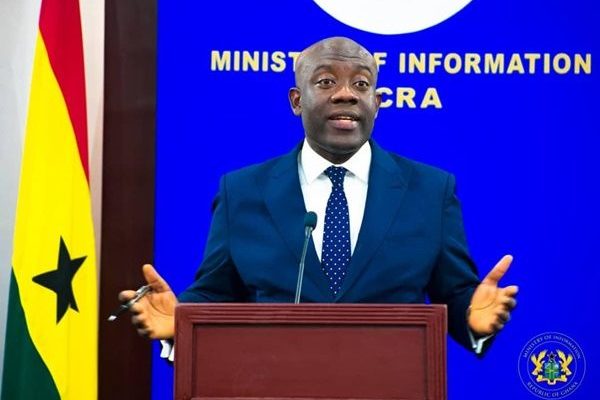 Mr Kojo Oppong Nkrumah, Minister of Information, has said the New Patriot Party (NPP) Government is touching more lives in its two and half years in power than done in the last decade.

He said the over 100,000 students enjoying free Senior High Schools, over 10,000 young people getting jobs in the health sector and the extension of electricity to many more Ghanaians among others were indicative of how President Nana Addo Dankwa Akufo-Addo’s government had touched lives within the period.

Mr Oppong Nkrumah said this at the first Regional Townhall Meeting in the Volta Regional capital, Ho, on the theme, “Delivering on our promises; A focus on social investments.”

He said the Government believed it could do more, but its good works so far were enormous and called on Ghanaians “who support good governance to spread the good news.”

Mr Oppong Nkrumah said the achievements by the government proved that the choice Ghanaians made in 2016 for a change was a very good one and must be maintained in 2020.

He said the Nana Addo administration was creating the enabling environment to grow the local economy apart from its social intervention programmes and called for support from all.

Dr Achibald Yao Letsa, Volta Regional Minister, said the state of the Region was promising despite challenges and commended the Regional Coordinating Council, the Assemblies and the private sector for efforts at transforming the fortunes of the Region.

He said agriculture was doing well in the region with about 50 per cent of the country’s rice production coming from the Region in 2015.

The Regional Townhall meeting, which featured five sector ministers and Municipal and District Chief Executives will be replicated in all regions to engage the public on government policies.

All Municipal and District Assemblies exhibited projects to showcase government's provision of social amenities and services.

The G.M. Afeti Auditorium of the Ho Technical University, venue for the event was chock-full with chiefs, traditional leaders, religious leaders, heads of departments and agencies, students of various tertiary institutions in the Region, students in second cycle institutions, media houses and security service personnel among others.

Togbui Sri III, Awoamefia of Anlo who chaired the Townhall meeting, said he belonged to the doubting Thomases but was sharply convinced from pictorial presentations that a lot was going on in the country.

He said it was normal to accuse government “but what I have seen is marvelous. In the fields of health, education, economic empowerment” and urged government to continue to deliver on its programmes and projects.