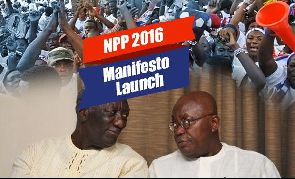 The opposition New Patriotic Party (NPP) will launch its 2016 manifesto at the Trade Fair Centre today.

The party's initial venue was the Tamale Sports Stadium, where it held its national delegates congress but the party(NPP) later indicated that the venue for the event had been moved to Trade Fair.

Former President John Agyekum is supposed to be lead the event at the forecourt of the Centre from 2pm.

The launch is expected to be followed by a major political rally, which, according to the party, will be opened to all members of the general public.

“The rally will be preceded by a stakeholder briefing of the manifesto to Civil Society and Identifiable Groups, Embassies and Diplomatic Missions and Political Parties at the Unique Events Palace, Trade Fair Center at 12pm prompt,” a statement from the party earlier indicated.
 
Persons expected to attend the rally include the Flagbearer of the party, Nana Addo Dankwa Akufo-Addo and his running mate, Dr. Alhaji Mahamudu Bawumia among others.

So far, only the governing National Democratic Congress (NDC) and the Progressive People’s Party (PPP), have released their manifestos ahead of the polls in December.

In September, President John Mahama launched the NDC 2016 manifesto at Sunyani in the Brong Ahafo Region, in front of thousands of party supporters from across the country.

Ahead of the manifesto launch today, Ghnews360.com has been examining some promises made by the party in its 2012 manifesto concerning the health, and education sectors.