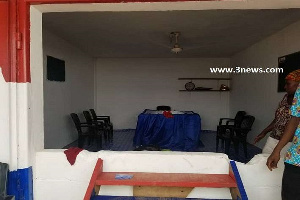 Executives of the New Patriotic Party at the Manhyia North constituency have deserted their offices in what is being viewed as a ploy to prevent the Member of Parliament for the area to file his nomination forms.

The MP, Collins Owusu Amankwaa, is said to be in the bad books of the executives due to a longstanding issue between him and the constituency executives which has created division within the party.

The disagreement which has been raging since 2016 and led to the slapping of the MP by the NPP Ashanti Regional Chairman Antwi Boasiako on May 1, 2016, is said to have reignited as the party gears up for its primary in the constituency.

His only contender, Akwasi Konadu, is also expected to present his forms to the party executives today.

By 11:00 a.m. Friday, the MP and his supporters, as well as some delegates of the NPP, arrived at the constituency office to find the place deserted, although the office was opened.

William Evans-Nkum reports from the constituency office that “The incumbent MP is supposed to file his nomination today but executives have deserted their offices to avoid receiving the nomination forms”.

According to him, the situation has created a volatile environment.

Chairman of the Council of Elders for the constituency, Nana Akwasi Gyembibi, has arrived at the party office to receive the MP’s nomination forms, Evans reports.