NPP Primaries: Nobody is above the law, arrest NPP delegates who violated Covid-19 protocols - NDC 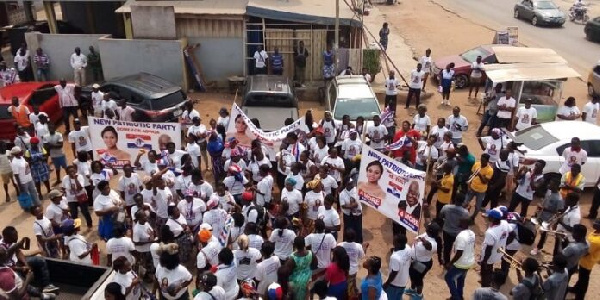 A section of the delegates displaying NPP paraphernalia

The opposition National Democratic Congress (NDC) is calling for the arrest of NPP delegates who violated the COVID-19 hygiene and social distancing protocols put in place by the Electoral Commission during the just ended Parliamentary primaries held by the ruling NPP.

The NDC in a press conference addressed by its Communications Officer, Sammy Gyamfi said, “Nobody is above the law over here. The NPP is not above the law, so we cannot have one set of laws for the New Patriotic Party, their officials, and delegates and have a different set of laws for pastors, Imams, and citizens. This is an insult to all of us and President Akufo-Addo should be ashamed”.

The comments of the Communications Officer comes after delegates of the NPP violated the protocols in the full glare of the police in their recent Parliamentary primaries.

Many Ghanaians have condemned the NPP delegates as their actions could lead to a spike in Ghana’s COVID-19 cases.

However, the opposition NDC is therefore demanding for an immediate release of some religious leaders and citizens who were prosecuted for breaching the Covid-19 hygiene protocols.

According to Sammy Gyamfi, the action and pretense of the government is not fair on many who have been prosecuted for such offences.

“We are saying that this is not fair and this is not justifiable, people have gone to jail for this we believe that the media and all of us must let President Akufo-Addo know that this is not right and they must be punished too, if not we have no business prosecuting others, we must as well release the pastors and the innocent citizens who have been prosecuted for the same offence”.

A total of 406 persons have being arrested for breaching guidelines on the restrictions imposed on the movement of people and social gathering protocols by the President according to the Head of Prosecutions for Accra Region, ACP Lydia Donkor

According to her, while 103 of them were in custody, 248 have been granted bail.