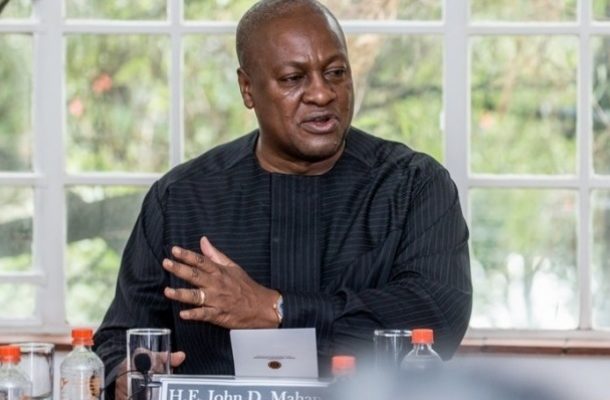 Former President John Mahama has condemned as intolerant on the part of the governing New Patriotic Party, the suspension of the headmaster of Tempane Senior High School in the Upper East Region by the Ghana Education Service for allowing the school’s campus to be used for politicking by the National Democratic Congress’ National Organiser aspirant Joshua Akamba last weekThe Upper East Regional Director of Education, Augustine G Ayirezang suspended Mr Dominic Ndegu Amolale shortly after a viral video on social media captured Mr Akamba campaigning among several dozen students of the school.Subsequently, the regional education directorate wrote to the headmaster demanding a report on why he allowed such a thing to happen on the school’s premises.

Addressing NDC supporters at the Wa campus of the University for Development Studies (UDS) as part of his campaign to be flag bearer of the party ahead of the 2020 elections, Mr Mahama said the suspension of the headmaster was needless.“Who went into schools more than somebody? We were in government and there was somebody, he was always in the schools and playing politics and yet we never sacked any headmaster, we never sacked any teacher because you have gone into a school. Then one of our aspirants for a certain position goes to a school and the students show him how bedbugs have chewed them and had a discourse with them then you suspend the headmaster and you say he should hand over and you are investigating him. Investigating him for what?”“The schools have children who are 18 years and above and they vote. And in our time in office, we allowed the opposition to go into the schools. That is the problem with NPP, they are highly intolerant: Things that we took for granted, they won’t take for granted. And, so, the poor headmaster has been suspended. And I hope the investigation exonerates him. And the investigators should know that when they were in opposition they did the same thing,” he added.