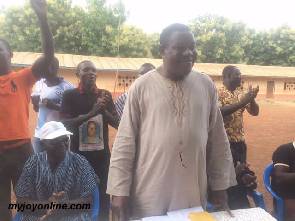 The incumbent Member of Parliament for Tatale in the Northern Region has announced his decision to go independent after losing the primaries to a New Patriotic Party candidate.

James Cecil Yanwube said he could no longer dismiss the call from party members who insisted that he should contest.

According to him, over 45 out of the 56 polling station executives of the NPP had called on him to contest the December polls as an independent candidate and he could not disappoint them.

At a ceremony to announce his decision to go independent, Cecil Yanwube parried rumours of allegations that he is flirting with the governing National Democratic congress (NDC).

A group known as the concerned youth of NPP in the Tatale Sangule Constituency in the Northern Region accused the NPP MP who lost the primaries of flirting with the NDC, the party he came from to join the NPP.

The group is, therefore, asking members of the constituency to rally behind the aspiring NPP candidate ahead of the December polls.
But the MP has dismissed the claims. He also dismissed rumours he has dual citizenship.

He said his commitment to the NPP remains unshaken despite his decision to go independent.

He told the party supporters who converged at the event that he officially accepted invitation by the group of polling station executive to go independent because he had worked hard for the people of the constituency.

Touting some of his achievements, he said, he had offered several students in the area scholarship to further their education, constructed boreholes for 16 communities, built schools and rehabilitated others, among other list of development projects in just four years.

He said he "left the NDC in 2008 and joined the NPP and has since been a faithful and paid up member of the NPP. ”

He said he was the first person to switch political carpets, citing late Alhaji Alue Mahama who he said was in the NDC and joined the NPP, the Petroleum Minister use to be an NPP member but today he is in the NDC, Okujato Ablaklu was NPP but he is now NDC. I am not the first person to move from one party to another” he pointed out.

Mr Yanwube warned that he would be forced to sue the NPP aspirant Thomas Mbomba if he continues to peddle lies about him.

He said even though he has decided to go independent, all the party supporters should remain committed to the party and vote massively for the party's flagbearer Nana Akufo-Addo and for him as well in the parliamentary primary.

Chairman of the Friends of Yanwube James Kpachin Tantare said but for what he called foul play in the NPP primaries, James Yanwube would have won the elections hands down.

He said there decided to call on him to go independent because in just four years they had seen the massive development he had brought to the area and they think he needs more time to complete more projects in the area.

Mr Kpachin Tantare said the people of the area had vowed that they will not allow Mr. Yanwube to step foot in the community if he refused to go independent.