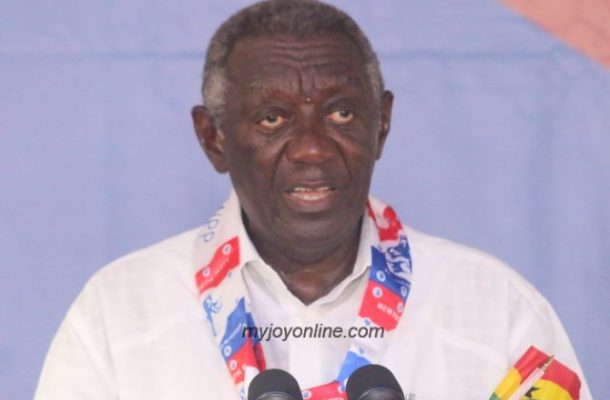 Former President, John Agyekum Kufour, says the next government of the New Patriotic Party (NPP), will fast track Ghana’s development in many phases to the level of the developed countries of the world.

He said the party is determined and ready to take over the reins of government of Ghana to “steer it once more to the heights of development and prosperity as we once did.”

Mr Kufour said the NPP is prepared and resolute to win power in the upcoming election having been in opposition for the last eight years.

Speaking at the party’s manifesto launch in at the International Trade Fair Center in Accra, Mr Kufour painted a picture of a party committed to not only making promises but also one that would implement its manifesto policies.

“Our mission, this time, will be to accelerate the nation’s development into the mainstream of developed countries of the world on a sustainable basis,” he emphasised.

Addressing party supporters think tanks, the media and some members of the diplomatic corps Mr Kufour said the party would take Ghana to new heights by upholding the rule of law, good governance and social advancement.

The former president remarked about the hullabaloo about manifestos emphasising a manifesto loaded with promises of development does not mean winning an election.

He also constructed several by-passes in Accra and Kumasi including the Asafo interchange, the restoration of Peduase Lodge, the drilling of several boreholes culminating in the solution to the perennial water problems in Cape Coast and Tamale.

There was also the expansion of the Aboadze Thermal Plant, the Kofi Annan Centre of Excellence, a state-of-the-art wood village at Sokoban, Kumasi for Anloga carpenters, the accident centre at Komfo Anokye Teaching Hospital (KATH) during his administration.

He appealed to Ghanaians to give the flagbearer, Nana Addo Dankwa Akufo-Addo; his vice presidential candidates, Dr Mahamudu Bawumia and the NPP the chance to come to power again this year.

Mr Kufour assured Ghanaians that within a space of four years, they would witness the beginning of the boost of the economy and social policies which would zoom the country forward into "permanent prosperity".

He said the NPP stands for all Ghanaians.